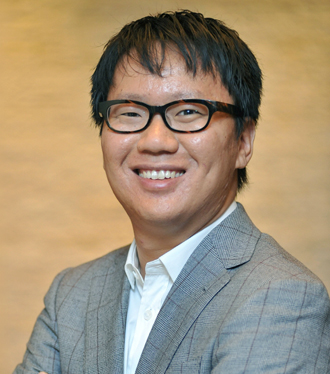 The battle of advertising among portal Web sites and advertisers on the Web is shifting to mobile devices.
The most common marketing tool for phones until recently was texts sent to mobile users. But mobile advertising is diversifying, as seen by the ads on mobile browsers or the banner ads that appear on mobile applications.

InMobi, an India-based mobile advertising network that provides an ad platform, opened a branch in Seoul last November. Naver announced early this month that it will develop platforms for the mobile ads.

Kim Seung-yeon, head of InMobi’s Korea operations, said that the market will only expand.

“More than 27 million people in Korea now use a cell phone and the advertisers need to be where people gather,” said Kim.

Before Kim joined the mobile company, he worked for Google in Seoul, Tokyo, Singapore and Shanghai.

“For Google, mobile advertising is one of the many businesses it has its hands on, but to us, it is the only thing we do,” said Kim. “The innovation speed should be different, so I think we still have a chance to beat the giant.” He demonstrates how ads work on mobile applications.

“If someone searches for what singer IU ate for a meal, the banner advertisement on this application will be related to diet,” Kim said.

The Korea JoongAng Daily sat down with Kim last week to talk about how the market will grow. 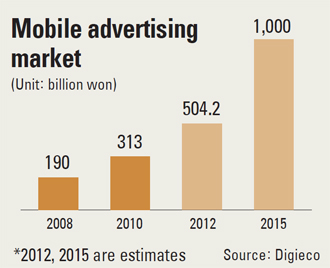 Q. What are the advantages of advertising on mobile devices?

A. In contrast to newspapers, TV or Web advertisements, it is possible to analyze who saw the ad. When people click on a mobile advertisement, the basic information of who they are, what they do and where they clicked the ad can be used in the database to further specify targets.

Is it possible for the advertisers to show ads to specific targets that might be interested in their products?

In the future, if a cosmetic company wants to promote its sale at Asem Tower [southern Seoul], it can be possible to show advertisement only to the people who are currently nearby or to people who showed more of a likelihood of coming to the event.

Location information will be crucial. But there are ethical questions over the companies collecting personal information. Will these be a barrier for the growth of mobile ad market?

The issue needs to be further discussed, but I don’t think controversies regarding privacy are pushing down market growth yet. The market is growing that fast.