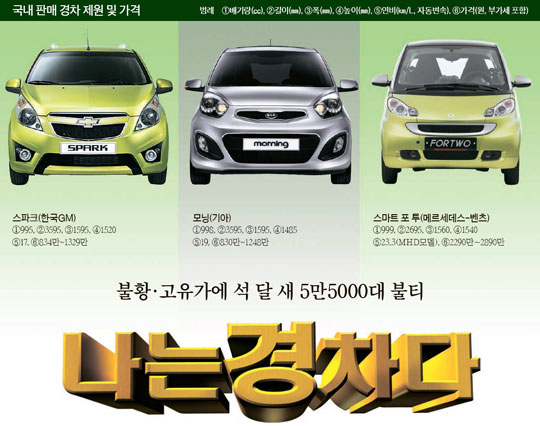 Kim Eun-seong, 32, lives in Pyeongchon, Gyeonggi, and works for a travel agency in central Seoul. He drives 60 kilometers (37.3 miles) daily to and from work, and also needs his car to ferry documents to customers.

He now drives a Morning, Kia Motors’ city car. It gives 19 kilometers per liter (45 miles per gallon) of gasoline.

“I saved around 50,000 won [$43] last month compared to driving a compact sedan,” Kim said.
And that’s just the gas. City cars are a lot cheaper on their owners in many more ways.

With high oil prices and a sluggish economy, city cars are gearing up into their third boom, following an acceleration of interest in other economically troubled times like in 1998 and 2008.

Sales of domestic city cars ? Kia’s Morning and Ray and GM Korea’s Spark ? jumped 21.2 percent in May from a year earlier to 18,376 units.

In the first five months of this year, city cars accounted for 15.7 percent of passenger car sales in the country, which is not quite as high as in 1998, during the Asian financial crisis, when the figure was 27.6 percent. It is higher than during the global financial crisis in 2008 when it was 14 percent.


“Around 30 percent of our sales come from Morning and Ray,” said Na Won-ho, a manager at a Kia dealer in Cheongdam-dong, southern Seoul. “Customers are not only curious about the car’s price but also about various benefits from buying a city car.”

City cars are classified as vehicles with engine displacements of 1,000 cubic centimeters or less.
Various taxes such as the sales tax, special consumption and education taxes are waived for city cars. Tolls and public parking fees are also halved.

In the case of travel agent Kim, his Morning was 10 million won cheaper than a compact sedan; he didn’t have to pay 700,000 won in registration fees and auto sales tax; and he saved as much as 50,000 won in public parking fees and tolls. 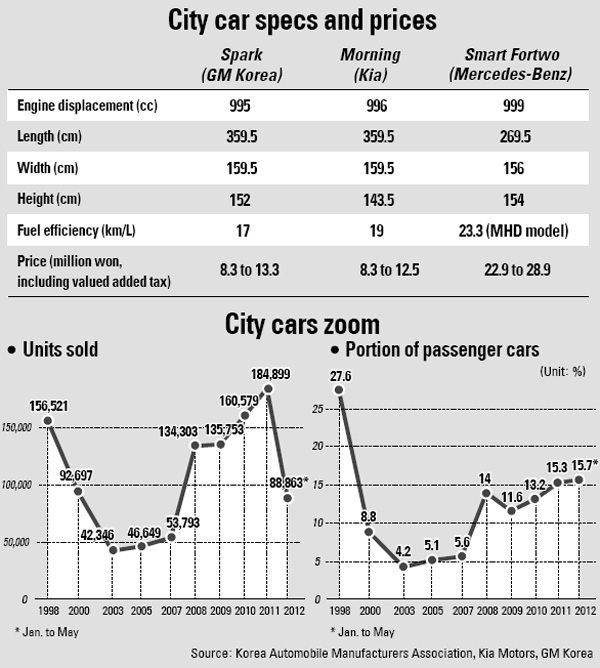 GM Korea released a pink-colored Spark last year to target female buyers, and it was a success.

“We are introducing tattooed and striped editions that can appeal to young customers,” said Lee Gyeong-ae, a marketing chief at GM Korea.

City cars are now equipped with options that were once unavailable to them. Morning now comes with folding outside mirrors.

Automakers are also offering better services. GM Korea is providing a three-year warranty for parts and a five-year or a maximum of 100,000 kilometer warranty for engines and transmissions. Kia also extended its warranty for Morning to the same length.

On the import side, Smart Fortwo, a city car from Mercedes-Benz, is also selling well. Its sales grew from 80 in 2008 to 170 last year. Fortwo is as expensive as a domestic midsize sedan, but its fuel efficiency is as high as 23.3 to 30.3 kilometers per liter.

Choi Jae-gyeong, a 37-year-old restaurant owner, recently bought a Smart Fortwo. “High fuel economy and various benefits offset the cost of running the car,” Choi said. “Even though it is an imported car, registration and purchase taxes were exempted, and this helped minimize the total purchase cost.”