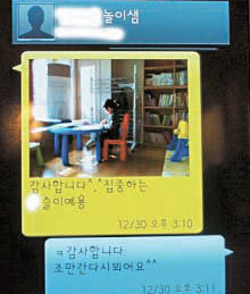 Shin Ji-hyeon, 35, a fund manager at a foreign finance company, fired her older babysitter recently after the lady insisted that her monthly salary of 1.5 million won ($1,290) per month was no longer acceptable in light of her extended working hours.

Instead, Shin place her 4-year-old daughter in a nursery in the morning and under the care of a college sitter in the afternoon.

“I’m now paying twice as much, but my child likes the new babysitter a lot more and she’s much easier to deal with, so I don’t mind the extra cost,” Shin said.

Students from the aforementioned universities are guaranteed an average wage of 10,000 won to 15,000 won an hour and can make as much in five hours as full-time babysitters can in a long working day. They are also up to three times as expensive as Chinese babysitters in their 50s, who also take care of housekeeping and get paid around 5,000 won an hour.

“Even though I only work two or three days a week, I can earn almost 1 million won a month,” said college student Kim In-hye, 20, who babysits in the afternoons.

“I can kill two birds with one stone by using the things I learn at school in real life and generating income at the same time,” said Lee Ki-sun, a 24-year-old student with the same major.

“College sitters” usually come prepared with picture books, clay art and English lessons. This differentiates them from regular babysitters who focus on housekeeping and merely keep an eye on the child.

Choi Kyung-ran, 35, has hired a college sitter for six months. “My kids enjoy being with her because of the entertaining toys and books she brings every day,” she said. “But I only ask her to play with the kids and have fun in the afternoons, because children get tired easily after two or three hours.”

The young babysitters often use their cell phones to make videos of the kids playing and send it to the mothers, or take the kids on “field trips” to amusement parks and exhibits.

Kim Nak-heung, a professor at Chung-Ang University who teaches early childhood education, said, “Our students have an exemplary understanding of a child’s development and pastimes, so they are very fit to aid children’s growth.”