Some street vendors are raking it in

Some street vendors are raking it in 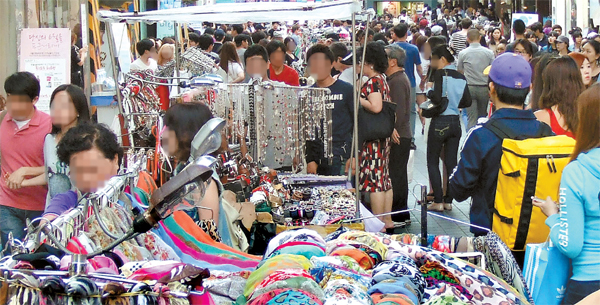 
Around 5 p.m. on Sunday, the streets of Myeong-dong were crammed with people enjoying their weekend and street vendors lined up peddling their wares, including bags and wallets.

A line of street vendors stretched down the main drag some 300 meters (985 feet) from Myeongdong Subway Station of Line No. 4 to Myeongdong Theater.

“If I want to run a business like you, what should I do?” the JoongAng Ilbo asked a street vendor who looked to be in his early 20s.

“I don’t know. I’m not the owner,” the man answered, a hostile look on his face. “I’m only helping my uncle.”

When the JoongAng Ilbo asked the same question to other young vendors, they responded by saying, “I work for my aunt,” and “I only get paid by my uncle for helping him out.”

“Most of them are part-timers,” a 63-year-old vendor surnamed Lee said.

“Owners tell them to answer that way to avoid government regulation. The owners who make enough profit to hire part-timers pretend that they barely make any money.”

Under the law, street vendors are subject to regulation, but most local district offices let them operate freely because many of them say they are in low-income brackets and can barely make a living by selling odds and ends, junk food and fake designer goods at cheap prices.

“Once you secure a good spot and just sell fake designer goods such as Louis Vuitton, it is possible to earn 5 million won a day,” a merchant surnamed Hwang, 40, said. “It is quite a cash cow because most street stalls are only open for seven hours [4 p.m. to 11 p.m.] a day.”

“Around 11 p.m., when most vendors begin closing down, owners show up to collect their money,” a merchant surnamed Choi, 41, said. “Some of them drive luxury imported cars and spend their days playing screen golf or billiards.”

Street stalls are sold like real estate. “Though a street stall is on sale, they only share that information with people they know,” a street vendor surnamed Park, 58, said.

The price for street stalls varies by location. An average price is around 50 million won and the price goes up to 150 million won if it is located in Jungang-no, the most popular place for international travelers and young shoppers.

Some owners lend a stall to a merchant for 3 to 5 million won a month or make a contract for 40 percent of a vendor’s monthly revenue.

Although the price of renting or purchasing a street stall is expensive, they are popular because it guarantees at least 1 million to 3 million won in revenue per day.

“It’s hard to track down street vendors because they [vendors] think we menace their right to live,” Lee Byeong-mok, a spokesman from Jung District Office said.