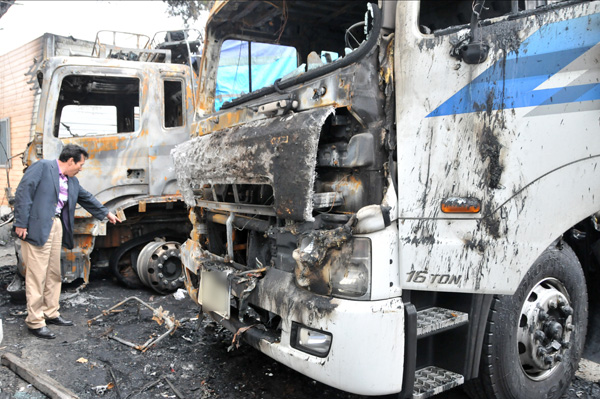 A cargo truck and an oil tanker, parked outside a gas station in Ulsan, were burned overnight. Yesterday alone, at least 19 trucks were burned by suspected arsons in Ulsan and Gyeongju on the eve of a unionized truckers’ strike.[NEWSIS]


On the eve of a nationwide strike by the Korean Transport Workers’ Union, dozens of cargo trucks and trailers owned by non-union members who said they wouldn’t join the strike were torched. 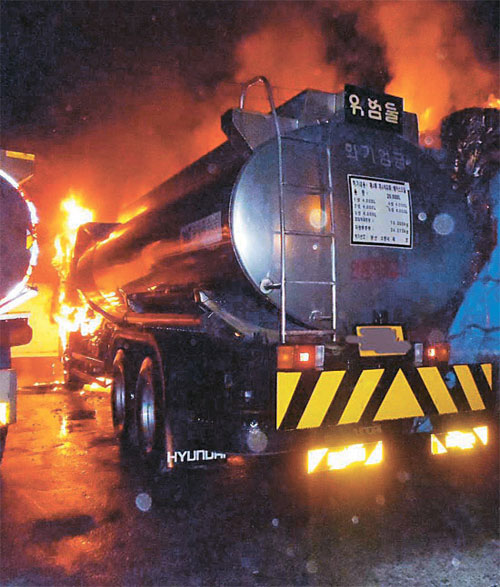 The National Police Agency (NPA) said a total of 27 cargo trucks and trailers in the Yeongnam regions - 14 in Ulsan, five in Gyeongju, five in South Gyeongsang, and three in Busan - were burned about every 20 to 35 minutes starting from 0:35 a.m. to 5:10 a.m. yesterday.

“All of the damaged trucks are owned by non-union members,” a spokesman for the NPA told reporters. “We suspect serial arsons committed by some aggressive members of the union to force non-members to participate in the strike, which will start on Monday.” The police formed a special investigation team for the case, and is currently pursuing suspects with CCTV footage it has secured.

The arson started at 0:35 a.m. yesterday in Busan, which completely destroyed a trailer and damaged the tires of two 25-ton trucks at the same time. The arson, then started flaring up in Gyeongju, Ulsan and two cities in South Gyeongsang, Changwon and Haman.

In Ulsan, the region that suffered the most damage, 14 trucks were burned after two 25-ton trucks, which were parked near an LPG station in Buk District, were enveloped in flames at 1:52 a.m. and 12 additional arsons occurred through 3:57 a.m. in Buk, Jung and Nam districts in Ulsan, the Ulsan Metropolitan Police Agency said. The police secured flammable agents such as thinner, red paint and pieces of thinner-stained fabrics as evidence.

Seven of the 14 burned trucks in Ulsan were completely destroyed and the remaining seven were partially damaged, causing more than 200 million won ($172,600) in property damage, the police said.

“We have nothing to do with the fires occurring over the weekend,” said Kim Jeong-han, the director of Ulsan branch of the Korean Transport Workers’ Union. “They must be fabricated accidents by non-union truckers because they were guaranteed by the Ministry of Land, Transport and Maritime Affairs to receive compensations if their trucks get damaged.”

The Korean Transport Workers’ Union under the Korean Confederation of Trade Union said about 80 percent of 380,000 truckers all over the country will stage a no-time-limit nationwide strike from 7 a.m. today, four months after they decided to organize it in February.

Truckers have demanded three things from the government so far: a 30 percent increase in transportation fees; industrial accident compensation insurance for all truckers; and standard freight charges, with the minimum calculated on delivery distance, fuel prices and transport costs. Currently, freight charges are decided by truckers and shippers.

“It is unfair that the police are pinpointing members of the union as primary suspects for the fires though they didn’t find any evidence,” the union said in a press release. “We demand the police run investigations fairly and also demand the government communicate with us to resolve problems.”

“We are already supporting 1.5 trillion won of fuel subsidies to truckers annually,” a spokesman for the Land and Transport Ministry said. “The strike is a collective action that lacks legitimacy.”

“The strike is not desirable because the situation of global economy is expected to get worse due to Europe’s financial crisis,” said President Lee Myung-bak, who is currently visiting Colombia. Lee instructed the ministry to ensure the strike causes no disruptions in shipments of daily necessities and export goods.

By Kwon Sang-soo, We Sung-wook[sakwon80@joongang.co.kr]