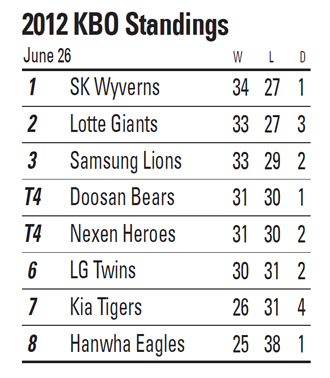 A rematch of the 2011 Korean Series should ensure the Korea Baseball Organization surpasses the four-million season attendance mark this week. The first-place SK Wyverns, who won the 2010 title after sweeping the Samsung Lions, will play a three-game series against the surging defending champions at Daegu Baseball Stadium. The clash of the titans begins tonight.

The Wyverns, who have retained the number one spot in the standings for a month, struggled last week, losing four of six games. It suffered a 2-1 come-from-behind loss against the Kia Tigers on Sunday.

SK had Samsung¡¯s number with six wins in nine showdowns against the Daegu club in 2012, but the Lions have found their stride, winning four games last week, although they dropped Sunday¡¯s game to the Nexen Heroes in extended innings. Samsung is now No. 3 in the standings, trailing SK by 1.5 games and the Lotte Giants by one game.

Despite a series of injuries, the Lotte Giants won five games last week to climb in the standings. In their game against the Twins on Sunday, Lee Yong-hoon, the Giants¡¯ starting pitcher, was close to completing the league¡¯s first-ever perfect game until he allowed a hit in the bottom of the eighth inning. He allowed two more hits and one RBI, but closed the eighth inning for his seventh victory of the season.

The Nexen Heroes, currently tied for fourth place with the Doosan Bears at 31-30, are also putting up a good fight. Kim Byung-hyun, a former Major League All-Star, clinched his first victory in the KBO last Wednesday against the Bears. He is expected to start today¡¯s game against Doosan once again. The Korea Baseball Organization predicts that the number of the spectators this season is expected to surpass the four-million mark today in only 255 games, which is 52 games less than when the milestone was reached last year.

If the current pace holds, the KBO attendance could reach 8.3 million this season.