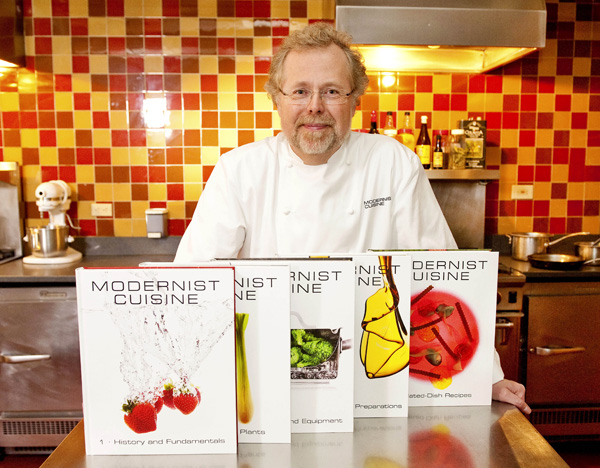 Nathan Myhrvold, author of “Modernist Cuisine: The Art and Science of Cooking,” poses with books from the work at the Institute for Culinary Education in New York. [AP/YONHAP]


You may not aspire to the culinary theatrics performed by the wizards of modernist cuisine - transparent ravioli? edible balloons? - but your cooking probably still could benefit from a few lessons from their labs.

And learning those lessons will get a lot easier this fall when food science becomes far more home-friendly. Riding the buzz of science-driven cooking shows and hot modernist chefs like Ferran Adria and Grant Achatz, publishers are releasing two books this fall that demystify the secrets of everyday food science, such as searing meat, scrambling eggs and measuring flour.

“The Science of Good Cooking,” from the test kitchens of Cook’s Illustrated magazine joins 50 basic concepts - why salt makes meat juicy, why high heat develops flavor - with 400 recipes that show you how to put those principles into practice.

Meanwhile, “Modernist Cuisine at Home,” from the laboratory that produced “Modernist Cuisine,” a six-volume encyclopedia of molecular gastronomy released last year, promises a bit more flair, urging home cooks to turn their blowtorches and meat injectors on comfy fare such as cheeseburgers and roast chicken.

“It used to be this obscure geeky thing to talk about food science,” says Jack Bishop, editorial director of America’s Test Kitchen, which publishes Cook’s Illustrated. “But now people see there’s a real connection between that and the kind of cooking they do at home.”

Bishop’s goal is to harness this interest to create better cooks by putting the “why” behind the “how.” Older, more experienced cooks may be using proper technique but may have no idea why it works or where it comes from, he says. For young people, who may not have grown up watching someone cook, the concrete explanations will provide a foundation.

“Somebody who’s been cooking a lifetime, like your grandmother, might have internalized these concepts and might have known intuitively that a roast will continue to cook when it comes out of the oven,” he says. “It helps you draw those connections that you might not intuitively see unless you’ve been cooking for 30 years.”

The book offers practical takeaways, like sidebars with small tips (a skillet works better than a wok for stir-fries) and techniques (sprinkle sugar on wet fish to encourage browning). Charts for cooking a roast that’s truly rare or for how much your cup of flour should weigh also provide easy references.

But if the levelheaded Yankees at the Boston-based test kitchen seek to educate, “Modernist Cuisine at Home” author Nathan Myhrvold wants to titillate.

He would have you turn your blowtorch on a steak or cook scrambled eggs sous vide, then deliver them as fanciful dollops through a whipping canister.

“We’re living in a very exciting time for cooking because all these things are possible,” Myhrvold says.

And not just in a professional kitchen, which admittedly is where so-called modernist cuisine earned its credibility (as well as a fair amount of derision). Much of the equipment called for - pressure cookers, meat tenderizers, whipping canisters - is available in shopping malls or on the Internet. And many of the techniques are simple, Myhrvold says.

Who knew you could caramelize vegetables in a pressure cooker with just a touch of baking soda? (Apparently, browning occurs at a lower temperature in an alkaline environment.) And grilled cheese is creamier, smoother and less greasy, he says, with a bit of citric acid, which acts as an emulsifier.

“Just because you think of it as a simple dish or a home dish or a low-brow dish doesn’t mean you can’t refine it if you know what you’re doing.” AP