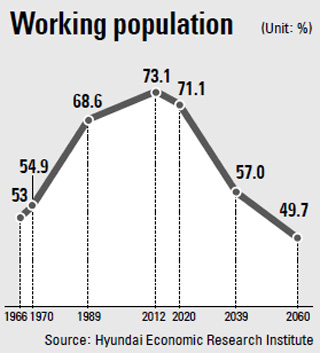 A day after Korea’s population surpassed the 50-million mark, the Hyundai Research Institute said, in a report on Sunday, that the nation’s economically active population, or fraction that is either employed or seeking employment, is currently at its peak and will begin to drop starting next year.

The report “Prepare for the Extinction of Demographic Dividend 2.0” said the economically active population will hit its highest proportion of 73.1 percent of the overall population this year.

The institute’s extrapolations predict that the rate will continue on a downward curve, dropping to 57 percent of the population by 2039 and 50 percent by 2060.

“Currently, the majority of workers in the labor force are in their 40s, but the average age will go up to 60 or older by 2028,” said Lee Jun-hyeop, a research fellow at the Hyundai Research Institute who wrote the report.

“The unemployment rate could increase significantly if job opportunities for older workers do not expand.”

The “demographic bonus,” defined as the period when the working-age population is particularly prominent, correlates with increased savings and future spending. Korea is currently at the peak of this so-called “bonus.”

“The increase in the labor force supply and the rising savings and investment will trigger the economic growth,” the report said.

But as the population shifts, the demographic changes could lead to financial crises. According to the institute’s findings, real estate prices could be affected by the workforce population.

“It won’t be the direct cause of the bursting of a real estate bubble or the start of a financial crisis, but it could form the base for such event,” said Lee.

The report cited that a similar phenomenon has been spotted in other countries including Japan, the United States, Spain and Ireland.

Japan, which saw a surge in the demand for property in 1980 when the labor force was on the rise, experienced a collapse in the real estate market when the percentage of the working population hit its highest point at 69.7 percent.

Spain had seen its real estate prices dip in 2008 soon after the labor force hit 68.7 percent of the population in 2005.

“When the labor force decreases, the government will be burdened to provide more welfare for the older generations while it will receive less tax revenue,” said Lee.

The report suggests that Korea should prepare to continue receiving the benefits of demographic bonus, as the working population is estimated to plunge.

It sees that the second generation of demographic dividends will come from the increasing number of older and female working groups.

The government should implement policies to increase employment, the report suggested.

The institute said such policies should focus on seeking ways to put foreign workers into practical use and work with North Koreans through a variety of joint ventures.