Hyundai Motor Group Chairman Chung Mong-koo urged Hyundai Motor and its affiliate Kia Motors to take preemptive action against the financial crisis in Europe, saying it should not affect its car sales in the global market. 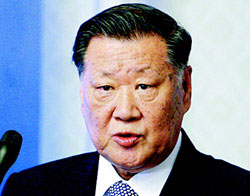 Chung held a meeting yesterday with overseas branch chiefs from the two automakers under his wing and discussed their production and global sales plans in the second half of the year.

The 74-year-old chairman was originally scheduled to hold the meeting next month, but as the European crisis continues to defy expectations of an early resolution, Chung apparently moved to draw up speedy countermeasures.

“We should prepare ‘differentiated’ countermeasures so we are prepared before the European financial crisis shifts to other regions,” Chung said.

“As we overcame the global financial crisis [in 2008] by resorting to more creative marketing, we should take preemptive actions to make another leap forward now.”

Chung made trips to Europe last September and again this March to check on Hyundai’s and Kia’s production lines and sales and marketing strategies there. He urged top executives at the group to do the same so they can tighten efficiency and prepare to weather the storm.

Car sales have in general been falling this year, with total sales falling 7.3 percent on-month in May to 5.64 million vehicles, but Hyundai and Kia have both bucked the trend.

From January to May, the two carmakers sold a combined 327,243 vehicles, 15.7 percent more than during the same period last year. Their combined share of the market is expected to surpass 6 percent this year.

Industry pundits said their success is in no small part due to demand for their small-sized and midsized vehicles, coupled with savvy marketing strategies.

Hyundai has been focusing on its I-Series lineup of small cars. The company released its new i30 in Europe in March and is expected to introduce a remodeled i20 and new Santa Fe in the second half of the year. Kia is busy promoting its Picanto (known as Morning in Korea), Pride (Rio) and newly revealed Cee’d, a city car released in May. All three are enjoying brisk sales in the region.

When demand from Europe and the U.S. was hit by the global financial crisis in 2008, Hyundai and Kia sought out other markets in India, China and Russia to survive. But if Europe’s fiscal woes continue unabated, these markets may also suffer, the group said.

It said it is not expecting any support from the governments of European countries to boost local consumption of automobiles due to the financial squeeze they are under.

Chung said the group is doing well despite the crisis but that it needs to step on the gas to stay in the race as conditions deteriorate.

“We have been doing well, but what’s important is the future,” Chung said. “We need to know that our customer service and the quality of our products determines when we face difficult times,” he said. “If we pursue flexible but consistent strategies, we will overcome these challenges.”