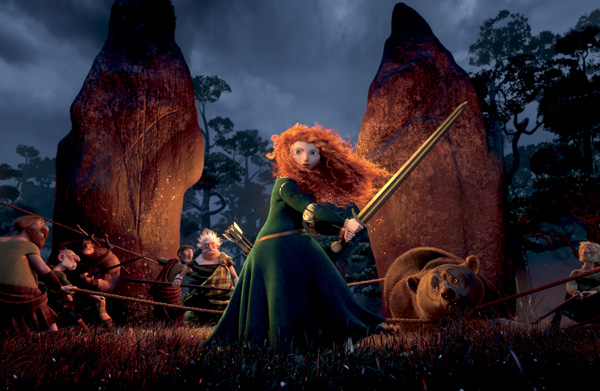 LOS ANGELES - Disney’s new animated movie, “Brave,” about a rebellious, red-headed princess battled to the top of movie box office charts over the weekend, scoring $80 million in ticket sales around the world.

The 3-D “Brave” is set in the ancient Scottish highlands and centers around horseback-riding teen princess Merida who defies her mother and her kingdom’s traditions. Merida, voiced by Scottish actress Kelly Macdonald, must then use her courage and archery skills to undo a curse.

The movie brings the 13th consecutive No. 1 opening to Pixar, which has become Hollywood’s most reliable studio during its 17-year history of making films. Starting with “Toy Story” in 1995, its 12 films before “Brave” have generated more than $7.2 billion in worldwide ticket sales, according to Hollywood.com.

“Brave” is a departure for Pixar, and is its first film to feature a strong female as the lead character, following a long Disney tradition with female heroines that in recent years have included “Mulan” and “Pocahontas.” “Brave” cost about $185 million to make.

“Brave” knocked another animated family film, “Madagascar 3: Europe’s Most Wanted,” to No. 2 after its two weeks in the top spot. The movie about a pack of escaped zoo animals took in $20 million at North American (U.S. and Canadian) theaters over the weekend, and the worldwide total since its debut rose to $157.6 million.

In third place on domestic charts, thriller “Abraham Lincoln: Vampire Hunter” rung up a solid $16.5 million. The movie imagines the 16th U.S. president fighting creatures of the night that are plotting to take over the country. Benjamin Walker stars as the axe-wielding Lincoln in the $70-million 3-D production.

The movie rung up another $8.1 million in international markets. Distributor 20th Century Fox, a unit of News Corporation, had projected domestic sales would hit around $15 million for the weekend.

In fourth place, “Alien” director Ridley Scott’s movie “Prometheus,” about explorers searching for the origins of mankind, added $10 million in domestic sales to bring its global sales after three weeks to $108.5 million.