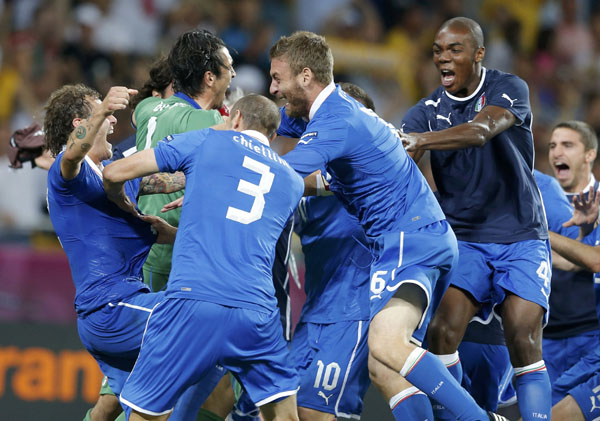 
OPALENICA, Poland - Some teams quake before Spain. Not Portugal.

Spain swept into the semifinals of the European Championship unbeaten, the only blemish on the defending champions' record being an opening 1-1 draw with Italy. Coach Vicente del Bosque has varied his tactics, fielding either a six-man midfield or a lone striker, in part as a way to trip up opponents.

That has forced some teams, most recently France in its 2-0 quarterfinal loss to Spain, to try to adjust their tactics.

But the Portuguese are having none of it, saying the key to Wednesday's semifinal against Spain is simple: Be themselves.

"We have to keep united as we've been so far, and we have to be ourselves and not change the way we play just because we're going to face the reigning world and European champions," defender Joao Pereira said. 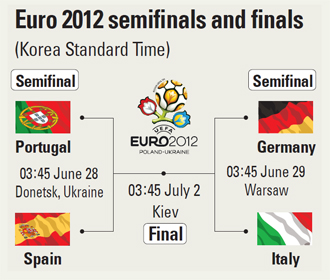 That attack will be led by Cristiano Ronaldo, who is back on form after failing to score in Portugal's first two matches in the tournament. The Real Madrid star has found his scoring touch since, netting twice against the Netherlands and one more against the Czech Republic to put Portugal into the semifinals.

In Poland and Ukraine, Ronaldo has finally put in the performances - and goals - for his national side that have made him one of the world's top club players for years.

It would be extra sweet for Ronaldo, one of the game's top competitors, to eliminate Spain, where five of his Real Madrid teammates play, including Iker Casillas, Sergio Ramos and Xabi Alonso.

In the other semifinal matchup between Germany and Italy, all eyes are on Bastian Schweinsteiger, who admitted he has niggling ankle problems.

The Bayern Munich midfielder has already endured an injury-hit season after breaking his collarbone last November before tearing ankle ligaments in February, which still hinders him.

"To be honest, I have a few worries about the ankle," he admitted in a syndicated interview. "The problem is when I explode off it. It has not healed properly."

Having set up both of Mario Gomez's goals in the 2-1 win over Holland as Germany went onto win Group B, Schweinsteiger was far less impressive in the 4-2 win over Greece in Friday's quarterfinal.

Germany coach Joachim Loew has already wielded the axe at Euro 2012 by dropping forwards Gomez, Lukas Podolski and Thomas Mueller in the win over Greece.

The gamble paid off as Gomez's replacement Miroslav Klose scored his 64th goal in his 120th international appearance, while Marco Reus deputized for Mueller by also getting on the score sheet. AP, AFP