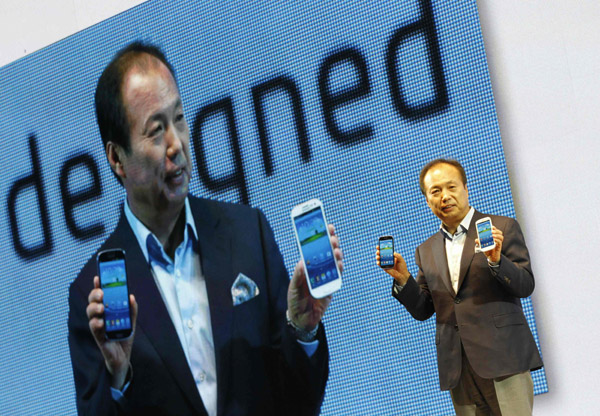 
At the eagerly awaited domestic launch of the Galaxy S3, J.K. Shin, the head of Samsung Electronics’ IT & mobile communications division, said yesterday the company’s second quarter earnings will exceed its Q1 result, when it posted a record-high operating profit.

“Despite the fact that supplies are flagging due to a shortage of some parts, not to mention the negative impact of the financial crisis in the euro zone, we are likely to see an improvement in our second-quarter results compared to the first quarter,” Shin said during a press conference held at the company’s headquarters in Seocho District, southern Seoul.

“We are doing relatively well in emerging markets and showing a competitive edge against our rivals there.”

In the first three months of this year, Samsung Electronics posted an operating profit of 4.3 trillion won ($3.7 billion). During the same period, it sold 44.5 million smartphones, with sales from its mobile division reaching 23.2 trillion won.

The company’s latest flagship smartphone running on Android was unveiled internationally in London on May 4. It was released simultaneously in 28 countries on May 29, including many in Europe - Samsung’s most crucial market - the Middle East and Southeast Asia.

“Sales of the Galaxy S3, which has been very positively received around the world, have finally started in Korea. It took some time for us to launch it here to meet domestic consumers’ high expectations,” Shin said.

Only in Korea will the 4.8-inch smartphone come in two versions, depending on connectivity. A model with 3G connectivity, which sells for just over 900,000 won, was released yesterday exclusively through SK Telecom. Another that enables a faster long-term evolution (LTE) connection on the 4G network will be unleashed in July. Samsung did not elaborate on the exact date.

Furthermore, Galaxy S3 owners will be able to take advantage of Voice over LTE (VoLTE) in the latter half of the year, according to Shin. “We are now in the middle of developing VoLTE technologies with carriers,” he said.

At present, LTE-enabled smartphones only offer the super-fast transmission of data through an LTE network. However, when SK Telecom, KT and LG U+ finalize their VoLTE technologies later this year, users will also be able to make noticeably clearer voice and video calls on the network. A Samsung spokesman said the new tech will be made possible via software upgrades.

Shin said the S3, now available in 147 countries, is expected to sell more than 10 million units by the end of July, the biggest figure for any handset released by the Suwon-based company. It took five months for its predecessor, the Galaxy S2, to reach the same figure.

However, this would still fail to match the speed with which Apple’s latest iPhone 4S flew off the shelves upon its release, with one million units being sold on the first day of its release in October.

Despite Samsung Electronics’ upbeat predictions, the company’s shares ended down 4.2 percent at 1,132,000 won yesterday, the lowest in four months after they hit 1.08 million won a share on Feb. 14.

“The share price seems to have declined excessively recently. Maybe the stock price shot up as investors expected too much and is now in the middle of a correction,” said Choi Nam-gon, an analyst with Tong Yang Securities.