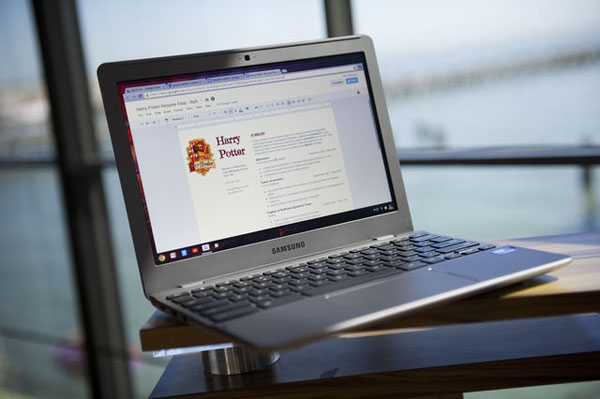 Samsung Electronics Chromebook. At the heart of the computer is Google’s Chrome OS, which is essentially a Web browser. [BLOOMBERG]


Has there ever been a piece of software more reviled or that’s had its obituary written more often than Microsoft Windows?

A year ago, Google and its hardware partner Samsung introduced a bold effort to drive a stake through the heart of Windows: the Chromebook laptop.

Here was a simple, easy-to-use computer that relied on the Internet to handle every task, from running programs to storing documents - all without a line of Microsoft code.

Both the product and its reception in the marketplace were less than stellar. Now Google and Samsung are back with a new pair of computers, the Chromebook Series 5 laptop and Chromebox Series 3 desktop computer. They’ve improved from last year, but not enough.

At the heart of the computers is Google’s Chrome Operating System, which is essentially a Web browser. Instead of installing programs on the computer, you run Web apps - programs that are located online and accessed through the browser. Google maintains a Web site where you can find links to several thousand of them and install shortcuts on your computer.

There are advantages to this setup. The operating system on your computer is never out of date. In fact, Google has already pushed out multiple updates since last year’s launch.

All your apps are online and your documents are automatically backed up to the cloud, so you can access them from any Internet-enabled computer.

But there are disadvantages as well, principally if you’re somewhere without an Internet connection when the Chromebook’s usefulness plummets. Another limitation is its capacity: a mere 16 gigabytes, less than many smartphones.

Physically, the Chromebook is solid if nondescript. It weighs 3.3 pounds, is 0.8 inch thick, has a 12.1-inch screen and a battery Samsung says will last for six hours. The base, Wi-Fi only model costs $450; for $100 more, you can get one with built-in 3G service from Verizon Wireless, a U.S. phone provider. The price of the 3G model includes a minimal 100 megabytes of data per month. Plans with higher limits are available at extra cost.

New this year, the Chromebox costs $329, but you provide your own screen and keyboard; it’s comparable to Apple’s Mac Mini. Both Chrome computers use Intel’s lightweight Celeron microprocessor, a chip you can find in many comparably priced Windows PCs with far greater capabilities.

The first thing I did with the Chromebook was try to activate it in Bloomberg’s San Francisco office. A year ago, this seemingly simple task came to a screeching halt because - unlike every iPhone, iPad, Kindle and even phones running Google’s own Android operating system - the Chrome OS couldn’t handle the common authentication method we use on our network.

This time: success. Sort of. I still couldn’t do it, but three members of our technical-support team, after a fair amount of fiddling and fumbling, were able to make it work.

Except for that, the Chromebook is easy to use. Google has also added a couple of features that make it look and feel a little more like a traditional computer, including a task-bar-like launcher for opening new Chrome or app windows. You can also have multiple windows open at once and drag them where you like them.

I was also able to try out a new feature promised for next month: An offline mode that will allow you to work on a document even when you’re not online, then sync the changes automatically next time you connect.

Using a test document Google shared with me via Google Docs, I shut down my Internet connection, tweaked the file - a mock job resume for Harry Potter - and saw my changes reflected once I re-enabled access to the network.

I ran into trouble, though, when I attempted to open a Microsoft Word file I had e-mailed to myself using Google’s Gmail.

Three times, the download failed and I received an error message inviting me to help Google debug the problem. While I came up with a workaround, it’s the sort of thing that doesn’t instill confidence.

Overall, the new version of the Chromebook improves on its predecessor, and will be even better with the offline functionality. But “better than it was” isn’t the same as “a compelling experience.”