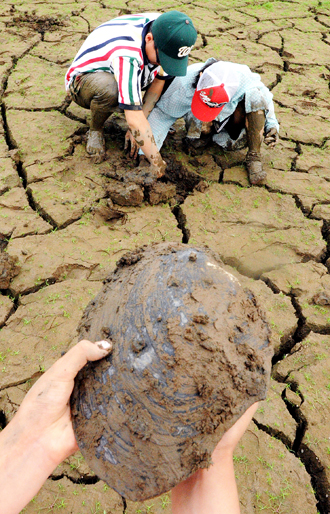 Officials and residents of Nonsan in South Chungcheong move dying cockscomb pearl mussels to water as the Tapjeong Reservoir runs dry with the onslaught of hot weather and the worst drought in a century. By Kim Seong-tae

Cracked like a turtle’s shell, the dried-out bed of the Tapjeong Reservoir in Nonsan, South Chungcheong, lay exposed yesterday as scorching sunlight beat down for the second month of the worst drought in 104 years.

The water reserve level of the reservoir dropped to a low of 19 percent, and patches of grass could be seen growing from its bed. Mussel shells the size of a palm lay splayed, empty inside.

With the onset of hot weather and a dry spell continuing since spring, the Korea Meteorological Administration issued yesterday morning a warning for the first heat wave this year, concentrated in northern Gyeonggi and Incheon, but lifted the warning yesterday night.

As the nation suffers from the lowest precipitation since weather observations were first recorded more than a century ago, farmers have seen crops wither and planting of rice paddies delayed, while South Chungcheong, Gyeonggi and North Jeolla faced drained reservoirs, ponds and streams, endangering species such as fish, frogs and shellfish.

Yoo Jeog-geun, an environmental official of the Nonsan city government, said, “In order to provide water for the agricultural industry, by this weekend the reservoir reserve water level will drop to 13 percent. As the water level drops, we have been busy since June 16 covering the cockscomb pearl mussels in water again.”

Cockscomb pearl mussels, which grow between 18-20 centimeters (7.1-7.9 inches) in width in freshwater spots like the Tapjeong Reservoir are a highly endangered species in Korea.

At the reservoir in Taean County, western South Chungcheong, some 2,000 cockscomb pearl mussels have died because of the dry spell, and the county relocated 500 mussels to a nearby reservoir in Seosan last Friday.

“It is normally spawning season for red-bellied frogs, but as streams dried up this year, they have been dying out,” said Shim Jae-han, a researcher of the Korean Research Society of Herpetologists. “If reservoirs and puddles dry up, reproduction of golden frogs will be difficult as well.” Golden frogs are found in the western part of the Korean Peninsula and are a protected species.

Since a 30-millimeter rainfall between April 25-26, Seoul has not seen a proper downpour. The Seoul Metropolitan Government said on Sunday that to keep the trees and grass in the Hangang Park area from drying up, they will be hosed down twice daily with water from the Han River. According the Seoul city government, the amount of rainfall since May 1 is 10.6 millimeters, a mere 5.2 percent of the amount last year, at 203.5 millimeters.

Kim Sung-jung, a researcher with the Korea Polar Research Institute, stated that the cause of the drought is believed to be cyclonic circulation in the atmosphere “due to the snow in Siberia and Tibet melting early.” This, in turn, led to high atmospheric pressure over the Sea of Okhotsk, which determines weather patterns in Korea, Russia and Japan in the summer months. The KMA is supposed to predict the onset of the monsoon season starting from Jeju Island by this weekend, but Lee Woo-jin, head of the KMA Numerical Weather Prediction Division, said, “Even if it rains this weekend, it is difficult to predict the exact level of precipitation, and there is a chance that the monsoon front may move south again.”