Strike begins with rumbles in Busan

Strike begins with rumbles in Busan 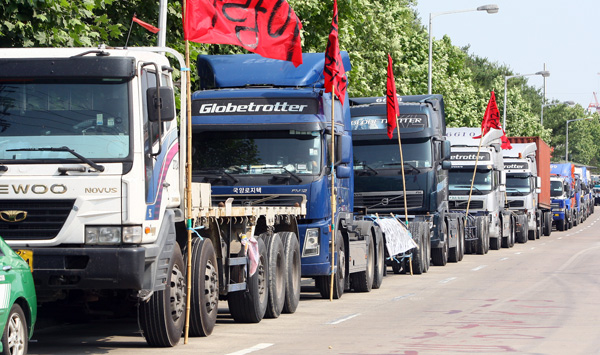 Trucks sit idle along the road near Uiwang Depot in Uiwang, Gyeonggi, as truckers began a general strike yesterday. [NEWSIS]


BUSAN - At 8:30 a.m. at the three-way intersection leading to the Pusan Newport International Terminal in Gangseo District, Busan, about 500 truckers gathered and started hanging signs that read “June 25, the strike begins, join us if you don’t want to be our enemies!” and “We deserve to live better!”

Some aggressive truckers threw eggs at non-union truckers coming out of the terminal, but were immediately restrained by riot police who were dispatched to protect the working truckers.

At 11:30 a.m., Park Yeon-ho, the director of the Busan branch of the Korea Trade Workers’ Union, climbed up a 50-meter (164-foot) light tower, which has a small platform large enough for one person to stand.

“Park decided to stage the high-altitude protest to urge the government to fully engage in negotiations with us,” a spokesman of the union said.

“He won’t get down until our demands are fulfilled.”

Truckers of the union under the Korean Confederation of Trade Unions staged a no-time-limit nationwide strike from 7 a.m. yesterday for the first time since 2008.

The union said about 8,000 truckers, including the 500 from the Busan port, participated in the protest held in Busan.

However, the Ministry of Land, Transport and Maritime Affairs estimated that only 2,040 truckers have joined the strike.

The union said it expects about 80 percent of the 380,000 total truckers, including 12,000 union members, to eventually join.

They are currently tallying up the total number of participants.

Truckers have demanded three things from the government so far: a 30 percent increase in transportation fees; industrial accident compensation insurance for all truckers; and standard freight charges, with the minimum calculated on delivery distance, fuel prices and transport costs. Currently, freight charges are decided by truckers and shippers.

No serious distribution crisis had occurred by noon as most truckers participating in the strike have been replaced with non-union drivers.

But some regions, including the Busan Newport, are strained as more and more incoming (imported) containers started to fill up the space for container terminals, but only a few of them were taken out.

“The quantity of goods transported from the container terminals in the Busan Newport has decreased by more than 30 percent,” said Lee Eung-hyeok, the director of Port Management Division of the Busan Port Authority.

“But we expect more truckers who are not participating in the strike will be encouraged to work more because we are telling the drivers that they are safe and will be protected by the dispatched police.”

Lee added that about 53.3 percent of the area allotted for containers at the terminal in Busan was filled as of press time yesterday.

“We should keep the number under 85 percent if we do not want to experience chaos,” he said.

At Uiwang Inland Container Depot, which handles 75 percent of the Seoul metropolitan area’s distribution (about 5,456 20-foot equivalent units), about 300 union members gathered near the depot at 10 a.m.

Lee Bong-ju, 40, the director of Seoul-Gyeonggi branch of the union, staged another one-man protest on a 30-meter CCTV tower outside of the Uiwang ICD.

From his perch, Lee complained that transportation fees have increased by only 7 percent since 2008, while the average fuel price has increased by 27 percent in the same period.

“We already have taken care of goods that must be shipped out by the end of the day during the weekend in preparation for the strike,” an official of the Uiwang ICD told the JoongAng Ilbo.

“But the situation might be much worse if the strike drags on for too long.”

In Incheon, another transport hub of the country along with Busan, no such distribution crisis occurred as only about 100 truckers from the union joined the strike.

They gathered in front of Lotte Mart near Incheon Port in Hang-dong, Jung District, from 1 p.m. and passionately urged truckers to join the strike.

There are 29,300 cargo trucks in Incheon, and about 600 of them are owned by union members.