After starting his career at the famous Hong Kong restaurant Lei Garden, Ku worked for several years at the Ritz-Carlton Osaka’s Michelin-starred Chinese restaurant Xiang Tao. For this July promotion, he will be preparing more than 20 dishes including conch salad, Guangdong-style smoked chicken, spicy salted prawns and chili-steamed pork ribs, as well as a special course menu. Ku’s cuisine focuses on producing original and innovative recreations of authentic Guangdong dishes and is characterized by his insistence on using only the freshest seasonal ingredients from the region where he is stationed.

During his July visit to Korea, too, Ku plans to use almost exclusively Korean-grown fresh ingredients.

Another unique attraction of Ku’s dishes is their beautiful, elaborate presentation, influenced by his experience of immaculate Japanese cuisine while working at the Ritz-Carlton Osaka.

To mid-September: Imperial Palace Seoul is opening its outdoor pool, the only one in Gangnam, southern Seoul, through mid-September. The pool is open from 9 a.m. to 6 p.m. daily. The hotel will extend the operating hours from July 20 to Aug. 15, when the pool opens at 8:30 a.m. and closes at 5:30 p.m., then reopens from 7 p.m. to 11 p.m. A variety of snacks and grilled dishes are available at the poolside bar, including king prawns, scallop skewers squid and lobster. For meat lovers, there will beef tenderloins, lamb ribs, minced beef balls, beef sirloins and sausages. A day ticket is 65,000 won ($56) for adults and a night ticket is priced at 32,500 won. The ticket includes a welcome drink on weekdays. Grill dishes are priced between 20,000 won and 50,000 won, excluding tax and service charges. 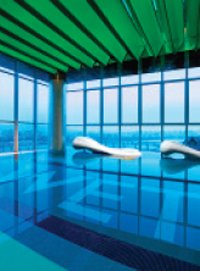 To early September: W Seoul-Walkerhill offers various packages to help you keep cool and have fun during the hot season in the city. The “Summer in the City - Chill Out” package consists of a double room for a one night, a breakfast buffet for two and one WooBingsu at the WooBar. WooBingsu refers to a type of patbingsu, a popular summer treat for many Koreans. Made with marinated boiled sweet adzuki beans, ice flakes and toppings such as fruit and ice cream, WooBingsu is a combination of Woo, from the hotel bar, and bingsu, meaning ice flakes. The package starts at 275,000 won, not including tax or service charges.

Another option adds fun time at WET, the hotel’s indoor pool with splendid river and city views, Summer Cool Cocktails for two at WooBar, access to Water Zone (sauna) and a manicure and pedicure at Style Lab. Prices for the second package start at 328,000 won.

Although the event is planned as a celebration of the U.S. Independence Day, you don’t have to be an American to take advantage of the promotion. All nationalities are welcome.


Event information is culled from the hotels.