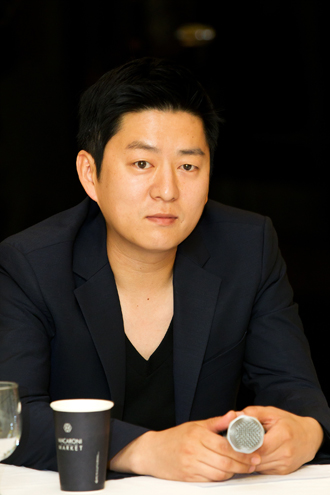 Chef Leo Kang is one of three judges on “Master Chef Korea,” the cooking reality show. “Of course, there are some participants whom the production team would love to have around for more episodes [for ratings],” he says, “but we can’t stop them from being eliminated.” Provided by CJ E&M

If there is one chef in Korea who can be called a celebrity, someone who consistently cooks up large helpings of publicity for the country’s culinary scene, it is Leo Kang.

As one of three judges on “Master Chef Korea,” the Olive TV’s version of the British reality show, the straight-talking Kang quickly captivated viewers with his exemplary career, logical yet blunt criticism and good looks.

Kang is the executive chef at Macaroni Market, his restaurant in Itaewon, central Seoul, but he used to spend most of his time overseas. Kang, whose specialty is French cuisine, worked as a sous-chef at the three Michelin stars bearing Restaurant Gordon Ramsay in London from 2003 to 2004 and at Pierre Gagnaire, which has one Michelin star, from 2002 to 2003. He was also a head chef at the Dubai branch of Restaurant Gordon Ramsay.

Both Ramsay and Gagnaire are internationally known chefs, with Ramsay most famous as head chef and host for the British and American versions of the reality cooking show “Hell’s Kitchen.”

With the first season of “Master Chef Korea” nearing its end, CJ E&M, which operates the cable food channel, organized a roundtable interview with Kang for local media. On the day of the interview last Wednesday at Kang’s restaurant in Itaewon, CJ Foodville, an affiliate of CJ E&M, announced the company had designated Kang as head chef for restaurant Bibigo in London, which is scheduled to open later this year.

Bibigo is a franchise that specializes in Korean food, especially bibimbap, or rice mixed with vegetables.

For about an hour, Kang discussed a range of topics, from his most difficult assignment to his overnight fame.

Q. How has your life changed since “Master Chef Korea?” Does it affect sales at your restaurant?

A. I don’t do social networking services such as Twitter and Facebook, so I didn’t really know what was going on around me on the Web. I didn’t really expect people would recognize me this much. The hardest thing after the show is I can’t complain any more at restaurants. I just eat no matter how horrible the food is. At my restaurant, sales have increased a lot and I recently paid incentives to all my employees.


You often lose your temper with reality show participants.

I do vent my anger on them, but I still use honorific language as a way to tone down my anger. [Laughs] If they were my staffers, then I would drag them out of the kitchen. But I know I should be considerate to these people, because they are amateurs. Still, even if they are amateurs, I think there is a certain standard for them to meet [in the kitchen].


Each participant has his or her own story. There is one woman who is hearing-impaired and a man who is on the show as a tribute to his ailing wife, who has cancer. The main goal of the show is to choose the best amateur cook, but it is also a reality show and there has to be a certain level of entertainment. Was it hard to strike a balance between the two?

About 4,000 people applied for the show in the beginning and we chose 470 based on their self-introductions. I met all the 470 people in person. You know, every person has his or her own story. Of course, there are some participants whom the production team would love to have around for more episodes [for entertainment purposes, thus better ratings] but we can’t stop them from being eliminated. Because all the participants watch and taste each other’s foods, they all know who is the best and who is not.


How do you feel when some participants talk behind your back?

I don’t really care about it because they are amateurs. Sometimes I see myself in them. I used to act and think like them when I first started cooking. I also learned one thing from the show - I’ve realized how people feel when I’m hard on them. Now I try to be more cautious when instructing my junior chefs in my kitchen. 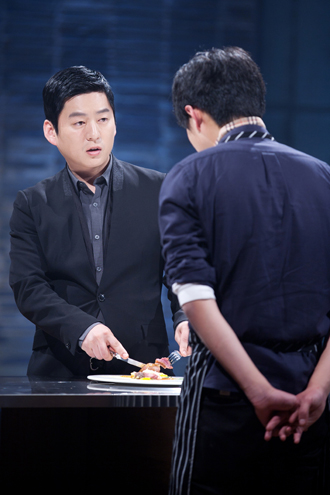 A “Master Chef Korea” contestant gets evaluated on his performance from judge Leo Kang. Provided by CJ E&M

Cooks were once considered one of the lowest occupations in Korea. It seems like things have changed a lot. Now we have a couple of food networks and the quality of cooking shows has gotten a lot better. How does that make you feel as a chef who’s been in the business over the past two decades?

I started cooking because this is the thing I could do best. And this job was considered one of the humble jobs when I first started, whether you worked at five-star hotels or neighborhood Chinese restaurants. I thought this job would become one of the most respected jobs in the future, but most Koreans didn’t think like that. So I headed overseas to learn more about it and people respected what I did in Europe. Now, I think job has become one of the respected jobs in Korea.

What are the differences between Korean and European kitchens?

Korean kitchens are very tight [knit group]. They are like families. Even if one of the kitchen staff members makes a major mistake, you should embrace him or her and lead the kitchen. European kitchens are very competitive. If one of the staff members lags behind, he or she is on his or her own. It is hard to survive in European kitchens. Seven or eight out of 10 Korean chef hopefuls return to Korea because it’s really tough out there. They usually work between 18 and 20 hours per day.

On the show, participants are given boxes of unknown ingredients and their mission is to use their knowledge, skill and creativity to prepare a dish. Tell us about the worst mission that was ever given to you.

There is a game season in Europe between September and February, when people are allowed to go hunting. During the season, huge amounts of food materials are pouring into the kitchen. Then you have to work about 20 hours a day for five or six months when the restaurant serves the game season menu. You have to skin and prepare about a dozen animals, such as rabbits and deer. About 20 or 30 different meats are placed in ovens at the same time and you have to cook each of them in different ways. It was the hardest and most productive time in my career. I was 24 years old back then.

You have just been designated head chef of the London branch of Bibigo. But you’ve been cooking French. How will your experience be useful when it comes to leading a Korean restaurant?

My specialty is French, but I’ve been doing classic French, Thai French and combining French with other European cuisines. I don’t really know about hansik, or traditional Korean foods, in depth, but I’ve been studying and I think I’m a pretty quick learner when it comes to Korean foods. I have already chosen about 40 menus for the restaurant.