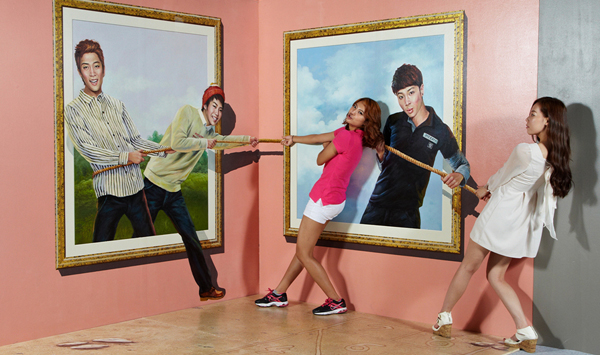 Two visitors to the K-pop Entertain-Art Show at the Korea International Exhibition Center in Ilsan, Gyeonggi, pose in front of a trompe l’oeil painting of members of the boy band Beast.


It’s a common fantasy among K-pop fans: Somehow, someway, Lee Hong-gi of FT Island invites you over to listen to his newest tracks. Suddenly, Choi Jong-hoon jumps out in attack mode, and you find yourself in a full-on pillow fight with the boy band members.

Pass through the gates of the K-pop Entertain-Art Show at the Korea International Exhibition Center (Kintex) in Ilsan, Gyeonggi, and this fantasy can become a reality - or at least look like it did through a camera lens.

Through the use of the French art concept trompe l’oeil, a technique that depicts realistic imagery in order to create a three-dimensional optical illusion, this exhibit enables avid K-pop fans to pose with their favorite stars as if those entertainers were standing right in front of them.

Although the “trick art” show originated in France, the style caught on in Japan and eventually made its way to Korea. This is the first time an exhibit of this nature has focused on Hallyu stars.

“We wanted to provide entertainment from K-pop that everybody could enjoy and afford,” an official of the K-pop Entertain-Art Show said.

“Many people are not able to attend celebrity signings or K-pop concerts due to time constraints or the hefty prices. We created a space where they can come and freely enjoy viewing the show and involve themselves in K-pop events.”

While it may not be as exciting as an in-person encounter with K-pop stars, for just 12,000 won ($10.40) fans can stand next to paintings of their favorite stars and take snapshots that look like they were right there with them.

With the authorization to creatively draw the Hallyu stars resting in the hands of their respective agencies, artist Park Hyong-duk and 14 others collaborated to gain the rights to create images of a wide range of celebrities, including Son Dam-bi, Super Junior, CN Blue, 2PM and TVXQ.

The venue is designed in a zigzagging pattern with designated spaces for each celebrity or band where numerous artworks can be found.

The exhibition itself is divided into three sections: the Star Zone, Theme Zone and Special Zone. 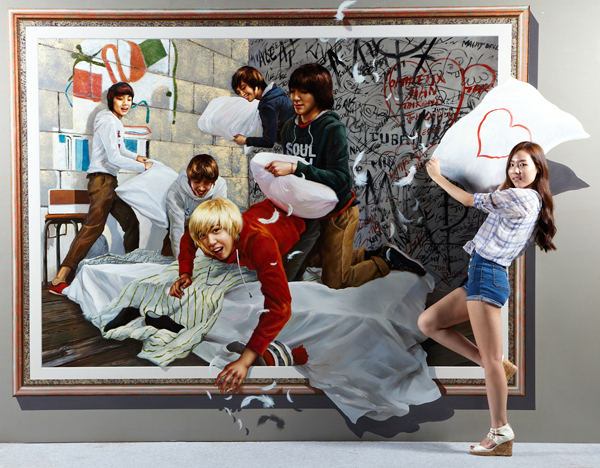 A visitor poses in front of a painting of FT Island members taking part in a pillow fight. Provided by the organizer


In the Star Zone, the most striking painting is one of girl group KARA. Using an art technique that resembles a moving picture, each of the five members of the group is painted on a cube-like sculpture side by side, and as soon as the observer moves, each member seems to move as well.

The Special Zone is where people can get a glimpse of what trick art is all about. The Ames Room within the zone offers an optical illusion reliant on relativity. One can seem to have a bigger or smaller physique depending on which side of the room the person is located. The secret to this type of art technique is that the room is asymmetrical.

The paintings were done by hand, yet quite a lot have a very life-like feel. Jo Jae-in, 15, came to the art show with her sister and mother.

“It was awesome to see my favorite signers, the Wonder Girls,” Jo said. “It felt like I was standing right next to them.”

The K-pop Entertain-Art Show is being held at Kintex located in Ilsan, Gyeonggi. Take subway line No. 3 to Daehwa Station, exit No. 2. The exhibition runs through Aug. 19. It is open from 10 a.m. to 8 p.m., but tickets should be purchased before 7 p.m. Tickets can be purchased online at www.interpark.com. For more information, visit blog.naver.com/kpopartshow or call (02) 512-9790.