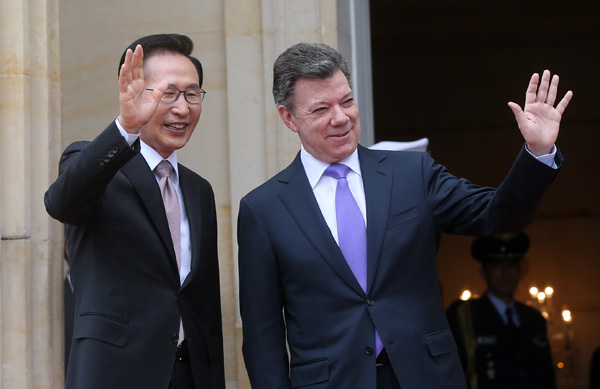 President Lee Myung-bak, left, and Colombian President Juan Manuel Santos pose outside the presidential palace in Bogota after announcing the signing of a bilateral trade agreement on Monday. [YONHAP]


Korea and Colombia?concluded a sweeping free trade agreement on Monday (Colombia time) aimed at increasing investment and trade flows with one of the fastest-growing economies in South America. The deal was signed during President Lee Myung-bak’s three-day state visit to Bogota.

Korean Trade Minister Bark Tae-ho and his counterpart Sergio Diaz-Granados signed a joint statement declaring the end of negotiations in a ceremony attended by Lee and his Colombian counterpart Juan Manuel Santos.

If ratified, the trade deal will be Korea’s third FTA with a South American country following ones with Chile and Peru in 2004 and 2011.

“We recognize that the Korea-Colombia FTA has been successfully resolved between the two negotiating teams and that this agreement is a comprehensive and high-quality FTA,” the two trade ministers said in a joint statement, wrapping up about 30 months of negotiations. The two sides held six rounds of talks since late 2009.

Lee stressed during a joint press conference with Santos that the FTA will further enhance bilateral ties between the two nations.

Bark, who accompanied the president, told reporters the trade deal will serve as a bridgehead to further expand into South American markets.

The comprehensive accord, which calls for the elimination of tariffs on major trading goods within 10 years, would increase the two countries’ bilateral trade volume fivefold over the next five years, said Lee.

Under the deal, Seoul and Bogota will scrap tariffs on 96.1 percent of Colombian goods and 96.7 percent of Korean goods within 10 years, according to the Ministry of Foreign Affairs and Trade.

In particular, Colombia agreed to eliminate a 35 percent duty on auto imports from Korea within 10 years and 15 to 20 percent tariffs on textiles in seven years.

It will also lift 5 to 15 percent tariffs on major auto parts from Korea either immediately or within five years, according to the ministry officials. The tariff will drop 3.5 percentage points annually.

In return, Korea will terminate tariffs on coffee imports, currently at 2 to 8 percent from Colombia, either immediately or within three years, while tariffs on bananas, currently at 30 percent, will be scrapped within five years, Bark said.

Tariffs on another 284 agricultural products will be scrapped more than 10 years after the pact goes into effect, he said.

After the deal is processed domestically, it will need to win approval from the legislatures of both nations in order to be ratified. Lee and Santos vowed to accelerate moves to put the pact into effect early next year at the earliest.

Lee told the Colombian newspaper El Tiempo that both countries will become hub markets for South American and Asian markets after the Korea-Colombia FTA is implemented.

Colombia was Korea’s 35th-largest trading partner with $1.99 billion of combined trade volume last year. It has high growth potential as one of the world’s major emerging markets, along with Indonesia, Vietnam and Turkey.

With a population of 46 million, Colombia is the third-largest market in South America and the fourth-largest oil producer on the continent. Its daily crude oil output is around 680,000 barrels.

Seoul is in FTA negotiations with 10 countries, including Colombia, New Zealand, Australia, Canada and Mexico.