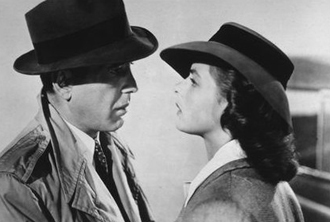 LOS ANGELES - Michael Curtiz’s best director Oscar for the movie classic “Casablanca” is going up for auction this week and is expected to fetch $2.5 million to $3 million, auctioneers Nate D. Sanders said on Monday.

The Academy Award won in 1943 by the Hungarian-born Curtiz, who died in 1961, will be sold tomorrow by the Los Angeles-based company. Online bidding, which opened last week, had already reached more than $369,000 on Monday, well past the reserve price that was not disclosed.

“Casablanca”, starring Humphrey Bogart and Ingrid Bergman, and set in the Moroccan city during World War II, is one of the most enduring romances in American cinema. In 2007, the Los Angeles-based American Film Institute named it as the third best film of the past 100 years.

Curtiz’s Oscar for directing the movie was previously sold by Christie’s in 2003 for $231,500 to U.S. magician David Copperfield. The auction house declined to name the latest seller.

Sanders said the market for Academy Awards has more than tripled in the past 10 years. “In some cases, especially for the best movies of Hollywood’s Golden Age, Oscars have appreciated beyond that. That regularly happens in the art and collecting market, where the very best items appreciate the fastest,” Sanders said.

Oscar statuettes rarely come up for auction following a 1950 agreement between winners and the Academy of Motion Picture Arts and Sciences that banned them from selling their Oscars to anyone but the Academy for the nominal sum of $1. But several pre-1950s Oscars have gone under the hammer in recent years. Last December, Nate D. Sanders sold Orson Welles’ Oscar for his screenplay of “Citizen Kane” for $861,000, and in 1999 the best picture Oscar for “Gone With the Wind” was bought by singer Michael Jackson for a record $1.54 million.