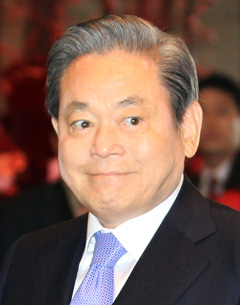 How much would you pay to have lunch with Korea’s richest man, Samsung Electronics Chairman Lee Kun-hee?

Berkshire Hathaway Chairman Warren Buffett regularly auctions off chances to have lunch with him, and millions have been raised and donated to charity.

In the case of Samsung, lunch with the chairman is actually going to be free.

Samsung’s corporate strategy office said yesterday it will pick 10 Samsung workers to have lunch with Lee, which is meant to send a signal about the importance of communication in celebration of Lee’s 25th anniversary at the top post.

The group began accepting applications yesterday from employees interested in having lunch with Lee. The final deadline is July 13.

“We didn’t expect this would be so popular, but the internal notice has already garnered over 200 comments,” said a Samsung spokesman. Samsung currently has 210,000 workers domestically across dozens of affiliates.

Applicants are required to submit a one-page essay explaining why they want to sit at the same dining table as the 71-year-old chairman of the nation’s biggest conglomerate. Samsung will assess candidates’ “truthfulness and distinctive aspects of the reason.”

Results will be announced in August, but the exact time and venue have not been decided. The spokesman said the venue is likely be a round table inside Lee’s office and the menu might consist of Western food.

Although this is the first time that the group has publicized a public lunch with the chairman, Lee has had meals with employees from time to time, according to the company. In April, he dined with nine female workers from various posts who had been recently promoted.

In the United States, the country’s wealthiest man, Buffett, has been auctioning off lunches with himself for the past 13 years, and the privilege went to an anonymous donor on June 15 who paid $3.46 million to Glide, an antipoverty group in San Francisco.