Marching to a brand new beat

Marching to a brand new beat 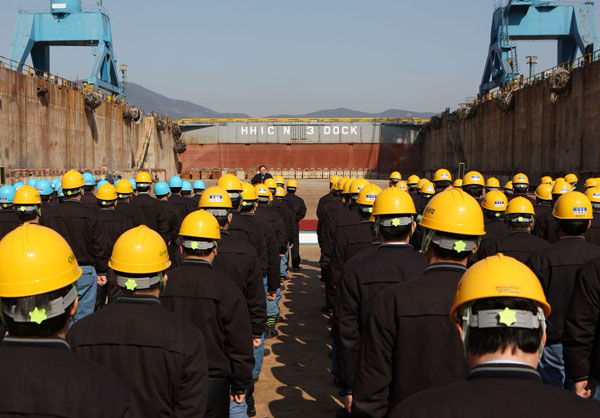 Employees of Hanjin Heavy Industries line up and listen to Chairman Cho Nam-ho’s speech about restoring the shipbuilder to its former glory at an empty dock of the company’s Youngdo Shipyard in Busan. Provided by the company


Things may get a little easier this year for Hanjin Heavy Industries, which has seen its reputation take a hammering due to long-running conflicts between labor and management.

After the strike by its trade union ended after 309 days last year, two pieces of good news arrived this month. The company won an order to build 10 5,000-TEU container carriers worth a total of $450 million. This was its first contract from a European shipper since it was commissioned to build four container carriers in April last year.

The ships will be constructed at the Subic Shipyard in the Philippines, a subsidiary of Hanjin.

“Despite the severe recession in the global shipbuilding market, Hanjin could win the order owing to the price competitiveness of its Subic Shipyard,” said Chung Dong-ik, an analyst at Hanwha Securities.

According to Chung, the biggest competitive factor of the Philippines-based shipyard is its low production costs due to the cheap labor available there.

“Ship prices are falling globally, and shipbuilders around the world are suffering thinning margins. But this can be an opportunity for Hanjin, which can build ships at a cheaper cost than its rivals,” he said.

Another piece of good news is that a new trade union has been formed under the slogan “co-prosperity and cooperation between labor and management.”

The labor union was created in January by 17 employees who didn’t agree with the company’s hard-line trade union and got fed up with the year-long demonstration. Currently, the new union has 567 members.

It gained attention after staging a campaign last week on the streets in front of the Busan Chamber of Commerce and Industries, during which it pledged to see Hanjin reborn as a new company without “extreme strikes.” Hanjin’s top management is also making efforts with the new labor union to get the company back on track. 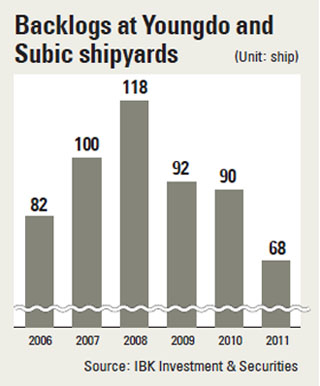 Chairman Cho Nam-ho vowed that it will restore its reputation as the nation’s No. 1 shipbuilder. Built in 1937, Hanjin’s Youngdo Shipyard in Busan ranks as the country’s first.

In February, the chairman held an emergency meeting at an empty dock in Youngdo Shipyard.

“We must use our willpower and desire to survive to fill this empty dock,” Cho said. Subsequently dubbed the “dock meeting,” it has become a symbol of Hanjin’s efforts to normalize its operations.

Orders have dried up at the Youngdo Shipyard. The last one was made in September 2008.

Both labor and management are now attempting to revitalize the de facto dormant shipyard.

“We are trying to improve the production system there by increasing efficiency and finding ways to cut costs,” said Lee Jung-hwan, an employee at the company.

The shipyard has small docks that are able to build medium-size ships measuring up to 300 meters (984 feet) in width. The Subic Shipyard is bigger and can build large ships with widths of over 550 meters.

Hanjin aims to transform the Youngdo Shipyard into a shipbuilding center focusing on special-purpose vessels like liquid natural gas (LNG) carriers and ice breakers. The company built Araon, the first ice breaker in the country, in 2009.

“The Youngdo Shipyard has probably the best technology for medium-size ships in Korea. But I am not sure if the company is doing the right thing as it shifts its focus from medium-size vessels to special-purpose ones,” said Yang Jong-seo, a research fellow at the Kexim Overseas Economic Research Institute.

The market for specialized vessels is smaller than that for regular ships, and the company’s technological capability to build the former remains weak, he said.

“Above all, the overall shipbuilding market is in such dire straits that Hanjin, which has lost its competitive edge because of the prolonged labor strike, can’t expect a quick turnaround in its fortunes,” the researcher said.

Its trade union waged a massive demonstration in late 2010 as the company forced 400 employees to retire. About 500 workers are on paid leave at present.