Palimpsest of farm life 4 millennia ago dug up

Palimpsest of farm life 4 millennia ago dug up 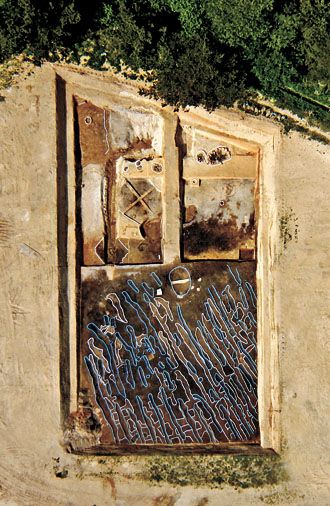 An aerial view of the excavation site showing residences (upper half) and farmland dating back to the Neolithic period in Munam-ri, Goseong, Gangwon. Provided by the National Research Institute of Cultural Heritage

When did people in East Asia start cultivating land, rather than merely gathering food and fishing?

At least 4,000 years ago, according to a recent archaeological discovery.

A national research institute has caught Korean archaeologists and historians off guard by announcing yesterday that archaeological traces presumed to be the oldest remains of agricultural fields in East Asia have been found on the nation’s east coast.

The National Research Institute of Cultural Heritage said it discovered traces of how the land was used during the Neolithic period in Goseong, Gangwon, about 466 kilometers (290 miles) east of Seoul.

Until now, Korean archaeologists have had to make do with circumstantial evidence suggesting that people might have cultivated land during this period. They found farming-related stone tools and carbonized grain from the era, but no remains of agricultural fields.

The oldest remains of farming fields ever found on the peninsula date back to the Bronze Age.

The institute confirmed the relics’ date of origin based on their features. Officials found pieces of pottery and stone arrowheads, both of which carry characteristics distinctive of the Middle Neolithic period (3,600-3,000 BC), and traces of a house from the period.