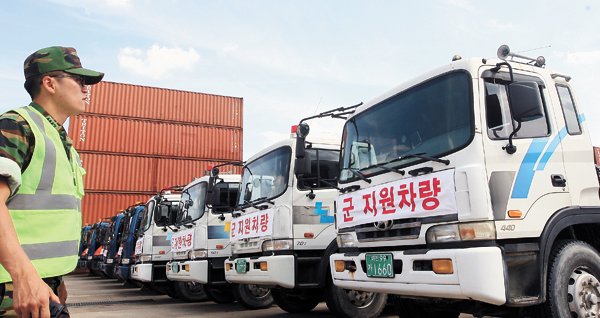 The Ministry of National Defense has dispatched 100 trucks and 200 soldiers yesterday to Uiwang Inland Container Depot (ICD) in Uiwang, Gyeonggi, which handles 75 percent of the distribution for the Seoul metropolitan area. [NEWSIS]


BUSAN - At the main gate of the Pusan Newport International Terminal (PNIT), a hostile warning blared from a loudspeaker installed on a 25-ton truck owned by one of the truckers participating in the nationwide strike.

A working truck was stopped while waiting for the light to change to get into the terminal. “We are going to hunt you down and destroy your truck if we see you again from now on!” yelled the protesting truckers to the driver. “We memorized your plate number!” As about 30 to 40 protesters approached the truck, the light changed just in time and the truck escaped into the terminal.

Some working trucks put small signs in front of their windshields which read “Heading to a factory, not transporting goods” or signs that show that the truck belongs to a corporation, in order to inform the striking members that they are not individual truckers or are currently working even though they don’t oppose the strike.

“I feel threatened every time I pass through this area though I decided to work for my family,” a trucker told the JoongAng Ilbo.

The Ministry of Land, Transport and Maritime Affairs said yesterday about 3,000 trucks had stopped operating as of press time.

Protesters are currently demanding the government give more fuel subsidies and increase transportation fees. The Ministry of National Defense dispatched 100 trucks and 200 soldiers to Uiwang Inland Container Depot (ICD), in Uiwang, Gyeonggi, which handles 75 percent of the distribution for the Seoul metropolitan area, in preparation for a distribution crisis.

The strike has led to a rapid decrease in the quantity of goods transported from the Busan terminal. At the terminal, an average of 42,000 20-foot equivalent units are handled each day, but the number went down to 21,971 during the first two days of the strike.

The terminal said about 58 percent of the area allotted for containers is filled, up from 53.3 percent yesterday, as more incoming (imported) containers are stacking up and fewer are going out.

If 85 percent of the area designated for containers is filled, the terminal will be in trouble.

Lee then started hitting the windshield and mirrors of the truck and beating the driver with a two-by-four piece of wood.