A new Korea returning to London

A new Korea returning to London 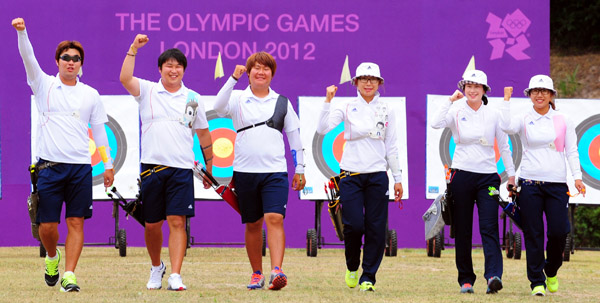 Members of Korea’s national archery team pose while training for the London Olympics at the Taereung National Training Center in northeastern Seoul, yesterday. The Summer Games begin its 17-day run on July 27. [NEWSIS]


Sixty-four years ago, Korean athletes traveled some 5,500 miles from a poverty-stricken and newly divided peninsula to London, a city recovering from World War II and hosting the Olympics for the first time.

This was also the first time Korea competed in the international sporting event. And in one month, athletes will return to London as one of the world’s premier sporting powers, symbolizing the extraordinary development of the country and the pride of its people.

Korea, recovering from 35 years of Japanese colonization, went on to win two bronze medals in 1948. In 2012 they will look to win at least 10 golds.

The pride of Korean athletes was evident in the faces of those attending yesterday’s Media Day event, marking the onset of the 30-day countdown to the 2012 Summer Games.

“Korea has grown spectacularly over the 64 years,” said Lee Ki-heung, president of the Korean Swimming Federation who heads the national squad. 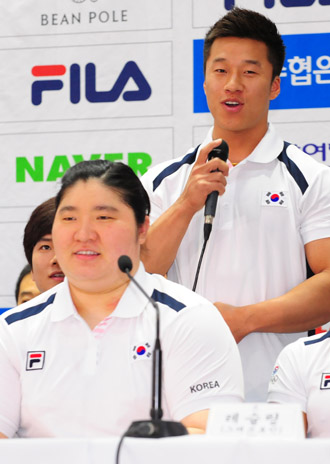 Jang Mi-ran, left, and Sa Jae-hyuk, gold medalists in the women’s and men’s weight-lifting competitions at the 2008 Beijing Olympics speak during the Media Day event. [NEWSIS]

“In sports as well, we have dominated the events which we previously thought impossible to compete in,” Lee added, mentioning Park Tae-hwan, the gold medalist in men’s swimming at the Beijing Olympics and Kim Yu-na, the figure skater who won the women’s figure staking gold in the 2010 Winter Games in Vancouver.

“With strong performances in the Olympics, we have helped improve our national image and brand, and we are ready to highlight it and further it in the London Olympics,” Lee said.

In its second trip to London for the Olympics, Korea sets its sights on a top-10 finish in the gold medal standing, according to Lee and other officials of the Korean Olympic Committee. This is on par with its previous records.

Korea came in the fourth in the gold-medal standings at the Seoul Olympics in 1988 and has retained a top-10 ranking since then, except for the 2000 Games in Sydney. In the Sydney Olympics, Korea won eight gold medals to come in 12th place before jumping to the ninth place with nine gold medals in the Athens Olympics in 2004.

At the most recent Olympics in Beijing in 2008, Korea won 13 gold medals, one more than it raked in at the Seoul Olympics, to be ranked seventh.

Dozens of the athletes attending Media Day, held at the Taereung National Training Center in Seoul where they are training, also expressed a strong resolution to put up a good fight in London.

“Over the past four years, I have analyzed why I failed [in the men’s doubles], and the competitions that I have attended in recent months are proving that the analysis is working,” said Lee, 24.

Paired with national teammate Jung Jae-sung, 30, Lee won the men’s doubles title at the Indonesia Open on June 17, rising to No. 1 in the world’s ranking in men’s doubles.

Other sports that Korea hopes to win gold in London are its traditional specialties such as archery and taekwondo as well as shooting, judo, weight-lifting, fencing, boxing and swimming.

Most of the sports will have final results in the early phase of the Olympics, which kicks off its 17-day run on July 27.

Aside from the one-time reward, the medalists will receive monthly stipends as well as commercial premiums linked to their new status as national heros.

“If you win a medal, life will never be the same,” said Shim Kwon-ho, the two-time Olympics gold medalist in wrestling who came to support the incumbent national team members. “Above all, it makes you feel like you have done something for your country and people and that’s what will be the biggest reward for these players.”

More than 370 Korean athletes are scheduled to compete in 23 events at the London Games.