Left: “Imperfect Flight” by Ahn Kyu-chul reflects the indecision of its creator. right: Noh Sang-kyoon’s “Star Club” is designed to give a sense of bewilderment.

Artists pushing boundaries is what the current exhibit at the Seoul Museum of Art in central Seoul is all about.

Aptly titled “Hidden Track,” the exhibition offers a rare opportunity to see 50 works, including some that have never been shown before, by 19 mid-career artists on the Korean scene. Many of the artists, most of whom are in their 50s and 60s, ventured into unfamiliar forms of expression for this show.

“From the beginning, we encouraged the participants to try new media so that they can set themselves free from the traditional way of expression,” said Kim Hye-jin, a curator at the museum. 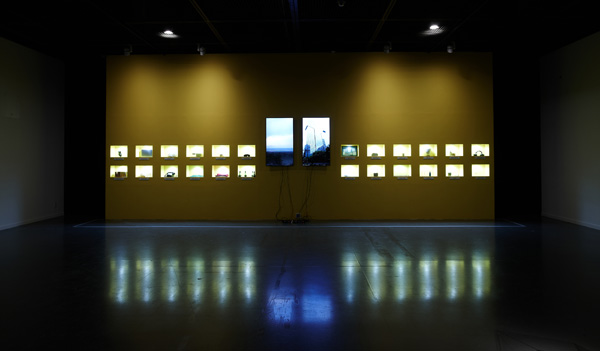 
“Leaving Alexandria” is the first installation work by Moon Beom, who has made his name with canvas paintings of otherworldly, abstract landscapes using acrylic and oil sticks.

In this installation, he uses a sunken shelf-like display, where objects such as a telephone, a wavy wig and other items are randomly placed in each partitioned area. Below each item is a label with a single, seemingly unrelated word. At the center of the display, there are two screens with contrasting images: a tranquil nature scene and a looming skyscraper.

Also trying his hand at installation art is Noh Sang-kyoon, who has spent most of his career using sequins to create glittering Buddha statues.

“I could not afford to try new things before, as I was preoccupied with sequins, but the exhibit allowed me to try a new media,” Noh told the Korea JoongAng Daily.

His installation attempts to re-create a dance club, with ear-throbbing music and pulsing laser lights. While experiencing the installation, all of a sudden the music ceases and the lasers fade to ordinary household lighting.

“I want to re-create the sense of awkwardness that people feel when the fun, or their attempt at an escape from reality, comes to an abrupt end and all of sudden it’s time to get back to one’s everyday normal life,” Noh explained.

At the exhibition entrance, a life-sized sculpture of a man suspended by what apears to be a large ball, looking as though it is on the verge of falling.

The curator said that the work, titled “Imperfect Flight,” represents the artist Ahn Kyu-chul, who says the work is intended to describe his own “indecisiveness.” Ahn’s works usually involve the metaphysical use of mundane objects, such as hammers, tables, doors and bags. But “Imperfect Flight” was an opportunity to explore self-representation in his art.

Even though some artists do not dabble in totally new forms, they still strive to doing something different. For example, Oh Hein-kuhn’s photography series, titled “Anxiety of Others,” is on display without frames - something the curator said he had not done before.

His work still appears to be in line with his previous portraits, which navigate themes of mental anxiety and emotional fragility, as in the “Cosmetic Girls” series of 2007 and 2008.

Choi Gene-uk, most notable as a realist, contributed a rare abstract painting containing a bevy of contrasting colors and a hole in the painting that symbolizes the passing of more than 20 years.

Another unusual aspect of the exhibition is the absence of young, emerging artists who frequently attract more attention.

“Hidden Track” is an opportunity for established mid-career artists - and art lovers - to do something different and have a little fun.