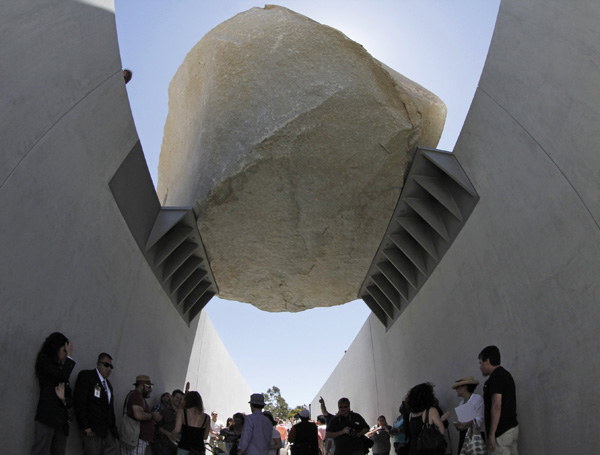 “Levitated Mass,” the 340-ton Nevada boulder that made headlines during its plodding 11-day road trip in March, was opened to the public Monday. “We knew it was going to attract attention,” said artist Michael Heizer. [REUTERS/YONHAP]


LOS ANGELES - The 340-ton granite rock that became a star during its slow sojourn across California roads in March took up residence at the Los Angeles County Museum of Art on Sunday at an unveiling that included an appearance by the reclusive artist who conceived the project.

“Levitated Mass,” the well-traveled boulder at the center of artist Michael Heizer’s new work, drew the admiration of musuem director Michael Govan, Terry Semel, the museum board co-chair, Mayor Antonio Villaraigosa and other local dignitaries at the ribbon-cutting ceremony.

“Art is made to memorialize time,” said Heizer, making a surprise appearance. “A culture is known by its art, not by its science.”

After opening remarks, the committee led hundreds of art lovers through the 456-foot-long groove that runs beneath the 21-foot-high boulder in the museum’s north lawn.

“It does make the impossible possible,” Govan told the crowd. “As Michael [Govan] said to me once, when do you ever get to see the bottom of sculpture?”

The stone made its 106-mile journey over 11 days in March, inching nightly on a massive heavy-duty trailer along California highways at an average speed of 7 miles per hour. It rested in the middle of the road by day, forcing the closure of some routes.

The sojourn sparked celebrations in neighborhoods along its route and made headlines around the world.

“Los Angeles is an automobile culture,” Heizer said. “What you saw was just the biggest automobile in town going down that road.”

Heizer, 67, has lived in a remote Nevada desert for the past 40 years, carving “City,” a monumental landscape sculpture to rival Mount Rushmore, out of the earth.

He conceived of “Levitated Mass” in 1968 when he found a similarly shaped but smaller (120-ton) boulder in Nevada, which he attempted to place over a slot dug in a dry lake bed. The effort, which broke the boom on a crane, failed.

After years of searching and producing subsequent landscape installations such as “Double Negative” (1969-1970), two enormous trenches each 50-feet deep and 30-feet and 60-feet wide each, with a combined span of 1,500 feet, on the eastern edge of Mormon Mesa, Nevada, Heizer found the perfect boulder for a second go at “Levitated Mass.”

“We knew it was going to attract attention,” Heizer said, addressing the media attention lavished on last winter’s move, as well the well-attended Sunday debut. “That’s not really the art, as far as I’m concerned.”

The journey and installation of the new artwork cost about $10 million, causing some to question such profligacy during lean economic times.

But Govan insisted that the funds, which were raised through private donations, created jobs for those who moved the boulder, and predicted “Levitated Mass” would draw tourist dollars to the city, although there is no charge for viewing the sculpture.

“It is a monument to our own time and our own place and our own aspirations as people,” said Govan. “Perhaps it will be here millennia forward, to communicate those feelings to future civilizations.”