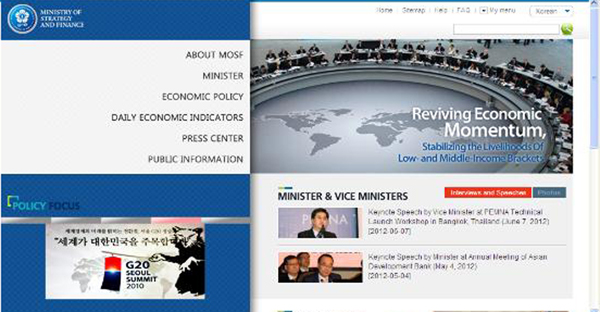 
The English-language Web site of the Ministry of Strategy and Finance was hacked Tuesday evening and police have launched an investigation into the affair, the ministry said yesterday.

A picture of a rat holding a traditional Korean lantern parodying President Lee Myung-bak with a reference to the Group of 20 Seoul Summit appeared on the ministry’s home page that evening.

MBC is currently staging a 140-day demonstration to oust its CEO Kim Jae-chul, who is seen as having been parachuted into the post by the president.

The drawing was identical to the one drawn by a university instructor on a G20 Seoul Summit poster ahead of the event in 2010.

Critics of Lee often use the image of a rat to mock the conservative leader.
Police obtained log records of the ministry’s Web site and were analyzing computer records as part of their investigation, a police official said.

“The hackers could have infiltrated the government’s integrated data center, and other official sites may be hit later on,” said an official at the ministry.
By Song Su-hyun [ssh@joongang.co.kr]