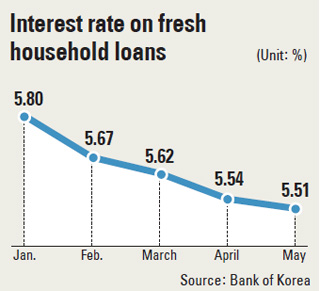 Interest rates on household loans from Korean banks fell for the fourth straight month in May as market rates declined amid a long streak of rate freezes, the central bank said yesterday.

The average rate for new loans extended to households stood at 5.51 percent in May, down 0.03 percentage points from the previous month, according to the Bank of Korea. It marked the lowest level since the rate reached 5.37 percent in December.

The Bank of Korea froze the key interest rate at 3.25 percent for the 12th consecutive month in June in the face of the spiraling euro zone debt crisis and a slowing global economy.

Local lenders’ loan-deposit spread reached 2.85 percent in May, down 0.03 percentage points from April, the Bank of Korea said. Yonhap