Renault’s No. 2 says Korea to be hub market in Asia

Renault’s No. 2 says Korea to be hub market in Asia 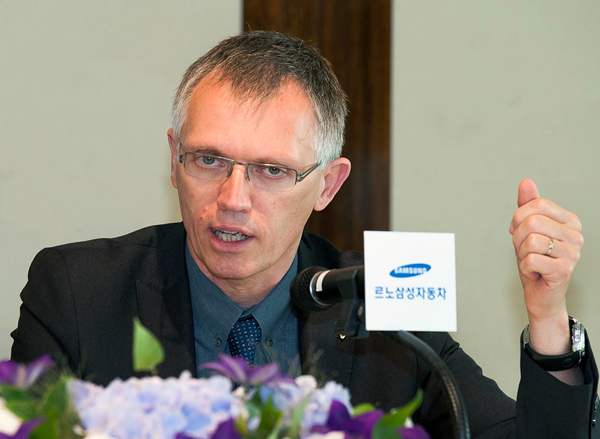 Carlos Tavares, COO of Renault Group, speaks during a press conference in central Seoul yesterday. He said Korea, as the home of Renault Samsung Motors, could become Renault’s hub for the Asian market. [YONHAP]

The Korean unit of the French automaker will also make moves to bounce back in the domestic market by adding a new model to its lineup next year, added the Portuguese.

Tavares ranks second in Renault Group’s pecking order after its long-time chairman, Carlos Ghosn. The 53-year-old visited Seoul at a time when the Korean unit is being hammered by falling sales. This has seen it scale back operations at its Busan plant to four days a week.

As the automaker is experiencing difficulties, rumors have started to surface that Renault may sell it off. At a press conference in Seoul, Tavares said such rumors are groundless before going on to discuss RSM’s future plans.

He said the carmaker still plays a key part in the group’s overall portfolio.

“We believe our operation here presents us with a good opportunity,” Tavares said. “We continue to keep the direction that we have so far implemented, and we want to keep RSM as a significant player in a highly competitive market.” 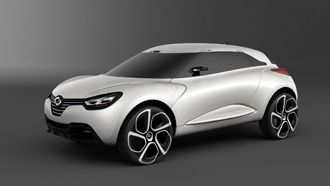 Tavares said he doesn’t expect Renault Group will suffer heavily from the cloud cast by Europe’s financial crisis as it is moving aggressively to expand in other regions around the world. Renault’s sales outside of Europe are increasing year by year. They already make up almost half, or 48 percent, of its total sales. But the COO expects to tilt this past 50 percent next year with the aid of RSM.

“We want to increase our market share in Asia,” he said. “We can use RSM as the starting point for Asia.”

The former head of Nissan Motors in America said that supporting RSM is important to boost its premium line-up.

“RSM is an asset for us in terms of what our premier customers need,” he said, adding that the group plans to utilize the knowledge and know-how gleaned from RSM’s high-end SM series of cars to enhance the rest of Renault’s premier models. 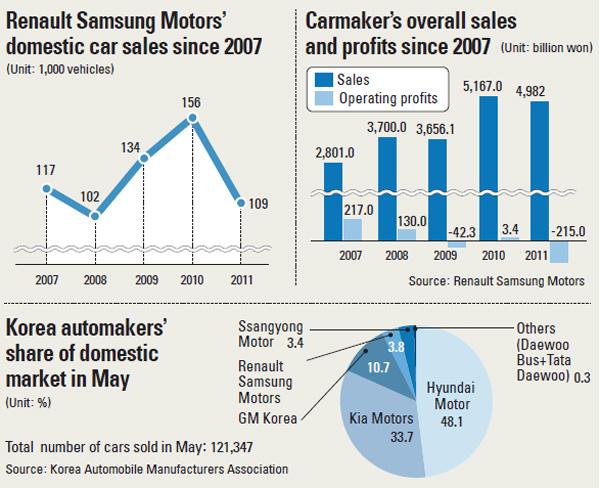 Tavares also presented a plan to revive RSM, which is on the verge of slipping to No. 5 in sales among local car makers.

This May, it sold 4,665 vehicles in Korea, down 41.8 percent on-year. Moreover, it held just 3.8 percent of the market last month, just 0.4 percent more than No. 5 player Ssangyong Motor. Hyundai Motor is No. 1, followed by Kia Motors and GM Korea.

“We’re not doing well, but at the same time, we need to recognize that our customers are satisfied with our product,” he said. “It’s not service quality or product quality that gives us a problem.”

Industry pundits say one of the reasons RSM is going downhill is because it lacks diversity. The company produces only four vehicles - SM3, SM5, SM7 and QM5, a sports utility vehicle.

Instead of introducing any new models, it has focused on changing the design of its existing vehicles, causing customers’ interest to wane. It is scheduled to release a new look for SM3 and SM5 in the second half of this year.

It was rumored to be adding a city car to its lineup, but Tavares has instead decided to add a compact crossover utility vehicle next year. Sources say the design was inspired by Renault’s Captur concept car, which was unveiled at the 2011 Geneva Motor show.

“The design of this car is outstanding and very fresh, so it will appeal to our young customers,” the COO said, adding that future models will also be more showy.

“We will do some refreshments,” the COO said. “We understand the flavor that Korean customers are looking for.” Describing the Korean market as “highly competitive,” he said, adding, “one additional product is not enough.”

RSM, which usually imports parts from Japan, will rely on local auto parts for 80 percent of its inventory to signal its commitment to the Korean market, he said. It may even use powertrains from Hyundai, he added.

“I can confirm that we need a more strategic, and more cross-over, relationship with Korean suppliers,” Tavares said.

The company is already localizing its resourcing at a fast rate, with 1,200 auto parts having been supplied from Korean companies and 200 more deals in the pipeline, said RSM CEO Francois Provost, who also attended the press conference.

Tavares declined to comment on Ghosn’s possible departure from the group. Ghosn, one of the highest-paid foreign executives in Japan, also serves as CEO of Nissan Motor. Overseas media recently reported that Tavares may be preparing to replace him.
By Joo Kyung-don[kjoo@joongang.co.kr]