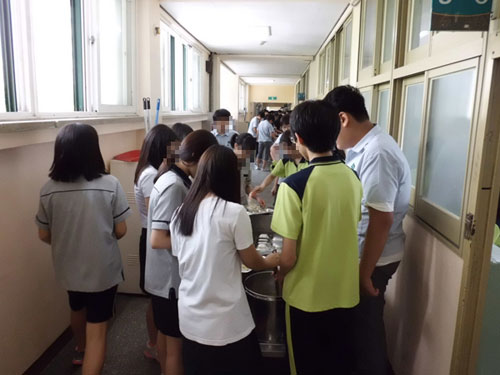 At one middle school in Gangdong District, eastern Seoul, on June 18, a group of some 30 students ran into the hall as the lunch bell rang.

They rushed to get in line for lunch trays distributed by their classmates.

The sooner they got in line, the more food they were guaranteed. Many skipped washing their hands.

“No one cares about clean hands. Being first in line is more important,” said a seventh grader surnamed Lee. “If I waste time washing my hands and end up at the end of the line, I may not get my share of food.”

Their classmates, who were not wearing hair nets or aprons, handed out the food. Trays were placed next to a janitor’s closet in the hallway. Upon receiving their share of food, students went back to their classroom to eat their meal at their desks.

On their way back to their desks, a number of students were seen dropping food. Once they were done eating, students poured their food waste into a large container which sat in the hallway for 20 minutes until school workers came to take it away.

The stains from spilled food were easily seen in the classrooms and hallways. In less than 30 minutes, the bell rang again and afternoon classes resumed. “The smell gets worse as the days get warmer,” said a 15-year-old student surnamed Kim.

This is not a rare scene. Many schools lack the proper lunch facilities to serve students. It is reported that 139 middle schools, or 37 percent, and more than half of elementary schools, 55.3 percent, in Seoul feed their students in classrooms. About 21.2 percent of the total 11,451 schools nationwide lack school cafeterias, which means about 1.48 million out of 6.98 million students in the country eat lunch inside their classrooms. Classrooms are at a greater risk of fostering hygiene problems than cafeterias, as revealed by a study conducted by Moon Hyun-kyung, professor of food and nutrition at Dankook University, in 2010.

Professor Moon placed bacteria incubators in a school cafeteria and a classroom for 15 minutes, measuring the air in both. The number of germs found in the incubator from the classroom was 370 per square meter (10 square feet), six times more than those in the cafeteria, which was found to have 59 germs per square meter. The study showed the number of germs found on school desks was twice as many as those found on cafeteria tables.

At another middle school in Yangcheon District, western Seoul, it takes one hour to transport food from the kitchen to the school hallways.

During the move, possibilities rise that “food will be contaminated with dust or rain,” the school’s nutritionist, surnamed Kim, told the JoongAng Ilbo.

“With the temperature on the rise, transported food is much more susceptible to germ infection,” said Joo Na-mi, a food and nutrition professor at Sookmyung Women’s University, who oversaw school lunch-hour procedures with the JoongAng Ilbo.

Professor Joo was especially concerned about the containers for food waste, which were left neglected in the hallway for up to half an hour.

“An overwhelming number of germs could spread from the food waste container within a short period of time under conditions like this,” she said.

There was another concern regarding the lack of space for kitchens. Under guidance by the Korea Food and Drug Administration, kitchens and dish-washing areas should be in separate rooms. Some schools, however, combine the two in the same space.

One middle school in Yangcheon District only has a yellow line drawn on the floor separating the two areas.

“I saw trays that have not been washed pass through the kitchen, raising concerns for food poisoning and other hygienic problems,” said the professor.

Some school principals cite difficulties in winning funding from the Seoul Metropolitan Office of Education as the main reason why they struggle to promote healthier school lunches.

“The Seoul Education Office told me it would fund the school to build the cafeteria, but once the free-school-lunch policy took effect, there has been no action,” said one school principal.

An official at the Seoul Education Office refuted the claim. “The education office distributes funds according to long-term policy plans. The idea that funding for school cafeterias was cut due to the free-lunch initiative is just plain wrong.”

An official from the Ministry of Education, Science and Technology, however, said otherwise.

“Some regional education offices in the country shifted allocation of funds to the free-lunch campaign instead of modernizing lunch facilities.”

“Because of the inadequate conditions of school facilities, properly managing the lunch hour has become a daunting challenge for many,” Moon Hye-kyung, a food and nutrition professor at Changwon National University, told the JoongAng Ilbo.

“There is an immediate need to fund schools that require renovation of their lunch facilities to ensure healthy and clean conditions for students.”