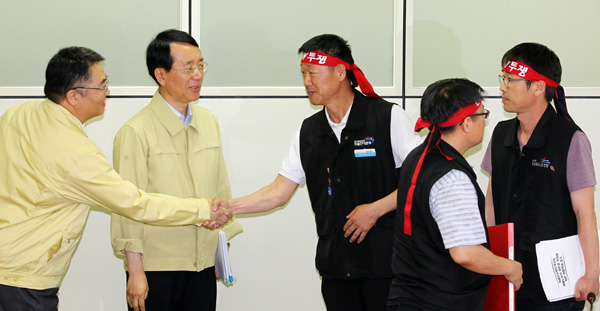 Leaders of the truckers’ union, including Um Sang-won, the chief director of Korea Trade Workers’ Union, third from right, meet with officials of the Ministry of Land, Transport and Maritime Affairs for negotiations on the government’s fuel subsidies in Gwacheon, Gyeonggi, yesterday. [YONHAP]


The leaders of the truckers’ union, who began a nationwide strike Monday, and government officials have opened negotiations to end the distribution crisis.

At 2 p.m. yesterday at the Ministry of Land, Transport and Maritime Affairs in Gwacheon, Gyeonggi, government officials, including Park Sang-ryeol, the director of the Distribution Industry division from the Land Ministry, and leaders of the unionized truckers began negotiations.

Truckers demanded the government provide standard freight charges with the minimum calculated on delivery distance and support for fuel prices and transport costs.

Currently, freight charges are decided by truckers and shippers.

“The negotiations have started much faster than we expected,” a spokesman of the ministry told the JoongAng Ilbo.

“We requested the truckers end the strike as the country is facing economic difficulties.”

Some officials in the ministry said the early negotiation reflects that the strike hasn’t turned out as the truckers intended.

“They want to end this as soon as possible because the participation rate for the strike is much lower than they expected,” sources said.

The ministry said that only 16 percent of trucks nationwide turned off their engines.

More than 70 percent of trucks stopped operations on the first day, when truckers staged a general strike in 2008.

In Pusan Newport International Terminal in Busan, the country’s largest trade port, about 26,000 containers - 12,000 containers for exports and 14,000 for imports - have piled up at the terminal in the last three days.

The Busan Port Authority said about an average of 42,000 containers should go out from the terminal daily to prevent problems.

Earlier in the morning, the Ulsan Metropolitan Police Agency, which is investigating the 27 burned trucks in the Yeongnam region, including Busan and Ulsan, caught a man in his 30s who is suspected of the arson.

The police have secured the suspect’s fingerprints from a toll ticket he handed to a worker at the Ulsan Interchange after securing CCTV footage that showed the suspect wandering around the areas where the arson occurred on the eve of the strike.

The police said the suspect used a truck registered under a borrowed name.

“I was at a convenience store in Busan at the time and I’m not a member of the union,” the suspect said.

“We have secured additional suspects’ fingerprints from the tickets,” a spokesman of the Ulsan police told the JoongAng Ilbo.

“We presume that the fingerprints belong to people who were with the suspect.”
By We Sung-wook, Kwon Sang-soo[sakwon80@joongang.co.kr]