The bar raised high, pressure is on for gold

The bar raised high, pressure is on for gold 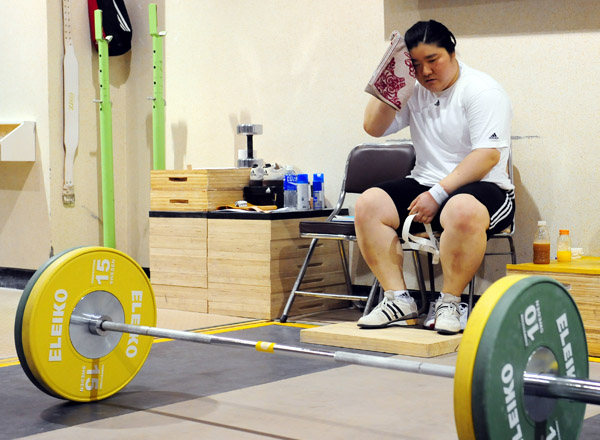 Jang Mi-ran, a gold medalist in women’s weightlifting at the Beijing Olympics, takes a break during training at the Taereung National Training Center in Seoul on Wednesday. [NEWSIS]


TAEREUNG, Seoul - It was only a 30-kilogram (66-pound) barbell, much less than the 186 kilograms she lifted in Beijing, but the Olympic hero resembled the Greek titan Atlas, the weight of the world seemingly resting on her shoulders.

In front of the swarm of journalists and photographers at the Olympic training session on Wednesday, Jang Mi-ran tried to hold her composure.

“Would you step aside, please?” a good-mannered, soft-spoken athlete asked the media personnel standing in front of her before lifting the weights. “It will be hard if I can’t focus my eyes straight ahead.”

Jang entered the Beijing Olympics four years ago with the goal of winning for her country its first-ever gold medal in women’s weightlifting. Not only did she beat out the fierce competition, but she set a new world record in the process.

Becoming a national hero, however, brings intense pressure along with it. In Beijing, Korea won 13 gold medals, the seventh most of any country. The bar was raised high, sometimes literally. And now the country somewhat takes it for granted that Korea will finish in the top 10 at the quadrennial event.

In order to match or surpass Korea’s outing in previous Olympics, athletes like Jang who compete in events not traditionally Korean strongholds will have to win gold.

The athletes’ can-do spirit was on display at the media event, with almost all of those heading to London repeating the tedious “I’ll do my best” mantra to the press.

But as Korea has developed into a sports powerhouse, some wonder whether the drive that led Korea to this point may have already peaked.

Lim Soon-gill, a sports education professor at Yongin University located southeast of Seoul, said Korean athletes have become sophisticated, so demanding they do their best and bring home gold medals won’t be as effective as it perhaps was in the past.

“As Korea is heading toward being a $30,000 to $40,000 income per capita country, the purpose of competing in sporting events is changing from winning them to enjoying being a part of them,” Lim said.

“If that trend continues, it is questionable whether Korea will continue its excellent run in sports that it has been on since the [1988] Seoul Olympics.”

Jang herself tried to tone down expectations, admitting that her condition and confidence was not at 100 percent. She said she would just do her best rather than pledge to win a medal.

Lee Hyeng-kun, the head coach of Korea’s national weightlifting team, was hesitant when asked about his goals in London. Korea’s weightlifters won two gold medals and one silver medal in the Beijing Olympics.

At all the previous Olympics combined, Korea had won one gold, three silvers and four bronzes in weightlifting.

The coach said finally that his team hopes to win three medals, but he didn’t say which color.

“We can’t set a goal as if we have suddenly become a superpower in weightlifting,” Lee said. “But, we don’t want to disappoint the public either.”

Fatigue has also affected Korea’s long-standing dominance in several sports. Korea has won 68 gold medals since its first Olympic outing in 1948, 50 of which came from only five sports: archery, taekwondo, judo, wrestling and badminton. In London, the country hopes to win at least 10 golds including eight from these five sports.

For the Korean archery team, which has won 16 gold medals since 1984, the London Games presents an opportunity or sometimes viewed as a duty, to extend their win streak to seven golds for the women’s competition and four golds for the men’s.

“It is a burden, to say the least,” said Jang Young-sool, head coach of the Korean national archery team, comprised of three male and three female athletes.

What makes it more challenging is a change in the rules in Olympic archery, which many Koreans see as a bid to put Korea’s long-standing dominance in the sport to an end. The rule has been changed to give less weight to consistency, for which Korean archers are known.

“People expect a lot from us, but I won’t say how many gold medals we target this time,” coach Jang said. “What I can say is that we will go out there to win for the country. That’s for sure.”

Im Dong-hyun, currently ranked No. 2 among the world’s male archers, is targeting his third Olympic gold medal in London. The winner of the 2004 and 2008 Summer Games, Im, 26, said he will not think about the pressure leading up to the Games.

The coaches were seen trying to help them deal with the pressure by trading jokes and placing bets on the results during their open practice session of the 70-meter distance on Wednesday.

“My predecessors did well, but rather than feeling pressured by it, I would take note of how they could overcome pressure from their predecessors’ feat,” Im said. “As they played their own game, I will play mine.”

Sa Jae-hyuk, who won gold in the men’s 77-kilogram weightlifting event at the Beijing Games, also said he has tried not to grow nervous about repeating his success. He said he will find inspiration from Kim Sung-jip, who won Korea’s first-ever Olympic medal as a weightlifter in the 1948 London Games.