The story behind ‘Wicked’s’ Gregory Maguire

The story behind ‘Wicked’s’ Gregory Maguire 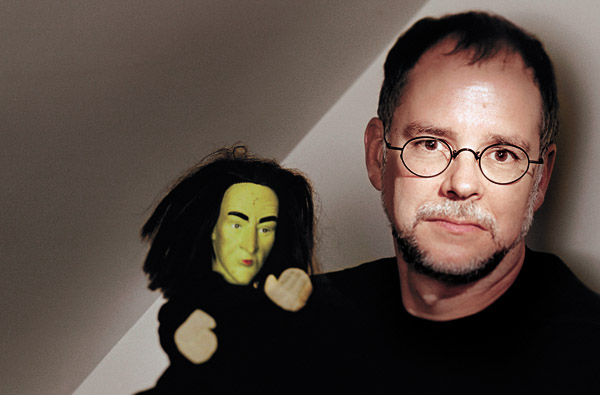 Gregory Maguire’s1995 novel “Wicked: The Life and Times of the Wicked Witch of the West“ is the inspiration for one of the world’s most popular musicals and part of a four-volume series. “The books are really more stories about power - individual power in making moral choices and governmental power in bullying populations,” he says.Provided by Minumsa


We all grow up reading fairy tales in which good almost always eventually triumphs over evil and it is clear which is which. But in life, the difference between good and evil is seldom black and white.

That gray area is at the heart of the musical “Wicked.”

Since its premiere on Broadway in 2003, “Wicked” has been one of the most popular musicals ever, seen by about 30 million people worldwide.

At Blue Square, Hannam-dong, central Seoul, where the musical has been playing for about a month, 90 percent of the seats have been occupied.

The man who started it all is Gregory Maguire, an American writer with a knack for reinterpreting and embellishing classic children’s stories to appeal to older audiences.

“Wicked” the musical is based on Maguire’s 1995 novel “Wicked: The Life and Times of the Wicked Witch of the West,” the first installment of the four-volume “The Wicked Years” series. Two more books in the series are scheduled to be published in the near future and all of Maguire’s books are available in Korean.

Maguire also wrote books based on the fairy tales “Cinderella” and “Snow White.”

In L. Frank Baum’s 1900 novel “The Wonderful Wizard of Oz,” the green-skinned Wicked Witch of the West harasses Dorothy Gale, who was swept away to Oz from her home in Kansas by a tornado. Glinda, the Good Witch of the North, is a kind and gentle character.

Maguire’s version tells the story of the two witches before Dorothy arrives. The green-skinned, good natured girl named Elphaba, who becomes the Wicked Witch of the West, has been taunted and considered evil because she looks different than everyone else. Yet she has the courage to stand against authority (the Wizard of Oz) and join hands with other minorities (the animals).

The novel also uncovers the snobbish and mean side of the beautiful, blonde Galinda, who later changes her name to Glinda, the Good Witch of the North. 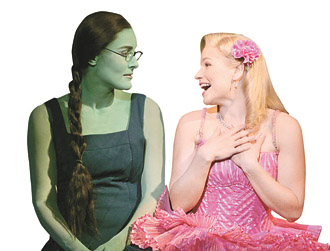 The green-skinned Elphaba (Jemma Rix) and blonde Galinda (Suzie Mathers) in a scene from “Wicked,” which is currently playing in Seoul. Provided by Andrew Rich

Q. More than 100 years have passed since L. Frank Baum’s “The Wonderful Wizard of Oz” was published. What made you choose that particular story?

A. I loved reading “The Wonderful Wizard of Oz” and seeing the film. As a child growing up in lower-middle-class circumstances, I did not have the advantages of lengthy vacations or even a lot of spare time on weekends. I had six siblings and a sick father, so we did a great deal of the housework with our mother. Consequently, the library was our refuge and our sanctuary. Books that suggested wildly improbable and magical lands were my favorites. At age 12, I preferred Narnia (C,S. Lewis) and Middle Earth (J.R.R. Tolkien) and even Neverland (J.M. Barrie) to Oz, which seemed too stuffed with Midwestern Americana and slightly soapy good cheer to be either interesting or believable.


When I decided I wanted to try my hand at a broad, deep story set in a magic land, the notion of using Oz came to me at once - in part because I found Oz somewhat lacking in believability.

For all that my books have magic in them, the magic is fairly limited. The books are really more stories about power - individual power in making moral choices and governmental power in bullying populations.


Although your novel is based on the 1900 novel, the theme is totally different. The green-skinned girl finds herself an outcast at wizardry school and becomes a roommate with Galinda and the story unfolds from there. And you talk about the blurred line between good and evil. With the novel and sequels, what do you want to reinterpret?

I was living in London in the early 1990s and became interested in the question of the origin of evil. The many theories about it arise from different schools of study: a philosophical approach, a psychological approach, a theological approach, a sociological approach. These are all interesting and valid, but they seldom can be considered together. I wanted to write the story of a person considered evil and see if, in so doing, I might discover something about the roots of evil.

I didn’t discover a thing, except that Elphaba stood up on her little green feet and began to live her own life in my typed pages. So I gave up on my high and mighty intellectual exercise and just decided to follow her around in my mind and take notes. These became “Wicked” and its sequels. In the later novels, the characters I invented for “Wicked” had taken on such reality for me that I no longer felt I needed to reinterpret a famous story, but just keep telling the story that was going on in my head.


The musical “Wicked” has become a worldwide hit. Do you think your novel is overshadowed by the musical?

You are quite right that my novel can be overshadowed by the giant musical. Still, the great success of that fine show brought millions of new readers to my novels, so I must not complain. I loved seeing it the first time - my head buzzed with disbelief and pleasure. Although the tone of the story is lighter than in my tragic novel, and the plot is simpler, I believe all the essential strengths of the play are inspired by my book - not just the comedy and the plot, but the characterizations as well. I am proud of the work that the composer and lyricist, Stephen Schwartz, did in writing the music, and the script writer, Winnie Holzman, did in making my complicated story intelligible to audiences of many ages. But I like to think I gave them enough to work with, and I do feel a distant, though parental sense, of ownership of the final product.

What first triggered you to start writing? Were those early writings published?

I began to write about the age of 8, out of boredom. None of my early work has been published, though I got my first novel idea when I was about 16, and that book was finished and published about seven years later as “The Lightning Time.”

You write for both adult and young readers, but you’ve been reinventing classic stories especially for adults. The 2003 novel “Mirror, Mirror” is based on “Snow White” and the 1999 novel “Confessions of an Ugly Stepsister” is based on “Cinderella.” Where do you get your ideas and how do you develop them into stories with more depth and layers?

It isn’t enough just to love an old story and feel like playing around with it. I have to see something in it that I think is half-buried or that others may not have noticed. In “Mirror, Mirror,” I decided that one of the central strengths of the “Snow White” story is that aging - maturing - has a cost to it. So I set the story in the High Renaissance because that time seemed like the development of an older-folk culture in a modernized, mature one, just as Snow White the child grows up to be a beautiful and marriageable woman.

What is your daily writing process?

I go through periods of taking care of business, which involves lecturing, household maintenance and a lot of publicity for my books. I usually write four to five months a year (often in the fall), and then I try to write between 90 and 120 minutes a day. I usually can get the first draft of a book done in four months by writing five to 12 pages a day.

You have written a number of children’s books and they deal with abandoned and lost children. Why are you particularly interested in such lives? And if you had to pick just one, writing novels for children or adults, which would it be?

Since my own mother died when I was born - of complications resulting from childbirth - and I lived in an orphanage for a while, I suppose children being separated from their parents seems a natural condition of the world. Almost all my stories begin in situations like this. It is as if stories don’t seem to have resonance unless they are founded in that native catastrophe.

I like writing both for adults and for children, but if I manage to do it well, I suppose I am a little prouder of my children’s work. Children’s writing is harder, I think, in that you have to make each word do a greater share of the work than in a longer book.