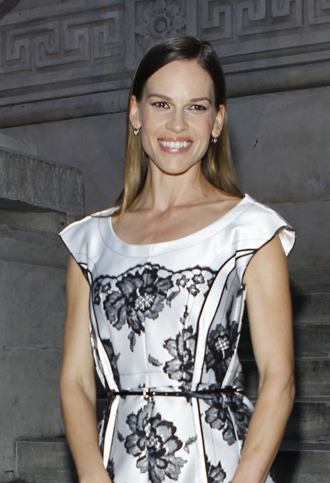 Swank, who won for her portrayal of a waitress-turned-boxer in “Million Dollar Baby,” visited Bucharest last week and showed a different kind
of skill: fighting for animal rights.

Swank, who says travel has been her best education, rarely leaves home without Kai, a devoted Jack Russell stray she rescued in Los Angeles.

In the Romanian capital Friday, she visited projects set up by the animal welfare foundation Vier Pfoten that encourage interaction between stray dogs and institutionalized people.

Bucharest has 35,000 strays and their fate has sparked a fierce debate here. Some believe they should be put down, others advocate putting the dogs in shelters, while others want strays to be sterilized.

Swank spoke about her devotion to animals, her belief in sterilization and the ways street dogs can help disadvantaged people.

“I believe that is so healing to these kids who don’t trust people anymore,” she said. “The unconditional love of an animal is very healing and teaches them about not just unconditional love but about a relationship, about responsibility, about anger management.”

Swank said she is starting a U.S. charity called Hilaroo to bring needy children and animals together. The charity combines her name and that of her late dog, Karoo.

“I’ve seen firsthand how it changes the path of the soul, for the animal and for the child,” she said.

Visiting a retirement home, she talked about one special dog that changed the life of an elderly woman.

“There was a woman who didn’t get out of bed and after a few weeks of the dog coming to visit she’s up walking,” she said. “The dog literally got her out of bed.”

Next month, the 37-year-old actress begins work on “Martha and Mary,” an HBO movie with Brenda Blethyn about two women trying to eradicate malaria.
AP