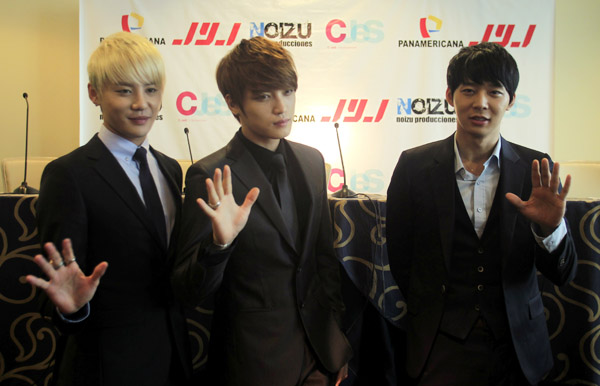 
Boy band JYJ was featured in France’s Le Parisien daily newspaper on Wednesday in an article on the group’s rise to international fame.

The article, titled “K-pop conquers South America,” delved into the appeal of the trio, commenting on its “addictive lyrics and perfectly synchronized dance moves.”

JYJ’s success in South America was highlighted with the mentioning of the band’s recent world tour, which had the group make stops in 15 cities across the globe.

The fact that an Asian group managed to perform for fans in European countries as well as in Chile and Peru was deemed a phenomenal feat by the French paper.

The report also mentioned the group’s official “Membership Week,” which opened yesterday at Setec convention hall in southern Seoul, and saw more than 7,000 Japanese fans visiting Korea for the chance to meet the boy band members. More than 3,500 hotel rooms have been booked for the fan event.

The paper called JYJ a “Hallyu group that knows no bounds.”