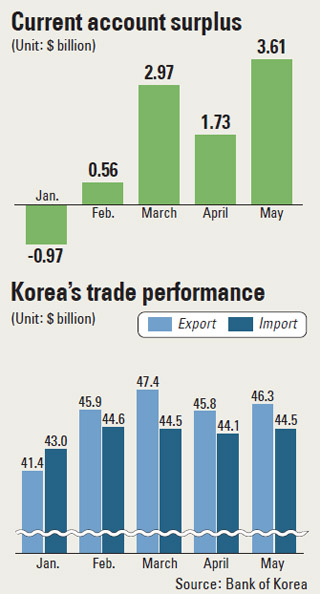 mid fears of the widening global recession, exports, the driving force of growth, have dropped back from a year ago.

However, the central bank stressed that the dip represents a correction after last year’s exceptional growth, which resulted from Japan’s devastating earthquake in March.

Yet skepticism remains as even the Ministry of Strategy and Finance, which until recently was optimistic the country would see economic growth of 3.7 percent this year, has lowered its projection in line with the drop in outbound shipments.

According to the Bank of Korea, exports last month contracted nearly 2 percent from a year earlier to $46.3 billion. Exports to major economies fell compared to a year ago. Exports to the U.S. saw the sharpest fall, as these were 8.3 percent smaller than in the same month in 2011, dropping to $4.74 billion.

Exports to China, which gobbles up 24 percent of Korea’s exports, more than any other country, saw the second-largest fall as these were down 4.9 percent on-year to hit $10.7 billion. Exports to Europe dipped 0.5 percent to $4.58 billion.

In contrast, exports to the Middle East saw the sharpest expansion, growing more than 24 percent to $3.41 billion.

However, when compared to April, exports last month grew 0.9 percent. The central bank attributed the growth to the strong export growth of steel and machinery.

Exports of steel in May when compared to a year ago grew 7 percent, while machinery grew 5.7 percent.

Automobile exports grew 3.2 percent. This is a sharp decline compared to a year ago, as in May 2011 they grew nearly 26 percent. Even when compared to April, when they gained nearly 13 percent on-year, last month’s growth was limited.

Exports of ships in May contracted 19.4 percent. Although this was an improvement from a 24 percent contraction recorded in April, it came in stark contrast to the same month last year, when they grew more than 23 percent.

Imports in May, although higher than April’s $44.1 billion, shrank more than 2 percent from a year earlier to stand at $44.5 billion.

As a result, the account surplus remained nearly unchanged from the previous month at $1.75 billion.

The current account balance for the fourth consecutive month posted a surplus of $3.61 billion. The surplus, despite being unchanged for goods, was largely fed by improvements in the service sector account, which gained $550 million to post a surplus of $1.59 billion. Yang Jae-ryong, an official at the BOK’s statistics department, was confident exports would post stronger growth this month. He said the current account surplus stemmed mostly from a decline in imports.

“The accumulated current account surplus between January and June will likely be $12 billion,” he added.