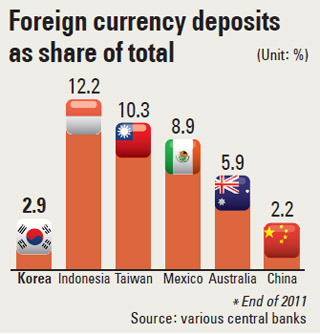 The government plans to fortify the volatile financial market against external threats by growing foreign currency deposits from 3 percent to 10 percent of total bank deposits, which now stand at $37.3 billion.

This would bring the country closer to other Asian economies. Taiwan, for example, has a similar economic structure to Korea but has already hit the 10 percent mark for foreign currency deposits.

Foreign investors fled Korea in late 1997, when the Asian financial crisis hit, and again in 2008 with the global credit crunch.

Since then, Seoul has been stockpiling its foreign currency reserve. It now stands at around $300 billion. Only six other countries have larger reserves.

Yet some pundits claim Korea’s reserve is not big enough to protect it if foreign investors pack up and leave.

Currently, local banks secure most of their foreign currency via overseas borrowing or bond issuance, also known as wholesale funding.

“Securing foreign currencies through wholesale funding compared to retail funding [or foreign capital secured through retail deposits] is costly,” said an official at Bank of Korea.

The interest rate on a foreign currency debt with a six-month maturity that resulted from overseas spending was 1.2 percent as of last month.

“Additionally, wholesale funding is structurally weak .?.?. especially in the case of a severe capital flight in times of crisis,” the BOK official added.

Among the $180.8 billion worth of foreign capital secured by local banks, nearly 30 percent relies on borrowing from abroad. More than half of the overseas debt matures in the short term. Additionally, 89 percent of the foreign currency deposits were made by companies, as it is used to facilitate overseas trades.

The government hopes to persuade retail investors to increase their foreign currency holdings. In particular, it aims to increase the deposits of offshore investors, including Koreans living abroad, through local banks’ overseas branches.

To do this, it is looking at offering various incentives. These include exempting nonresidential investors from paying income tax on foreign currency deposits, and improving the interest rate on such deposits.

However, the government has not set a date for executing the plan, and has refrained from saying when it hopes to raise the rate of foreign currency deposit to 10 percent.