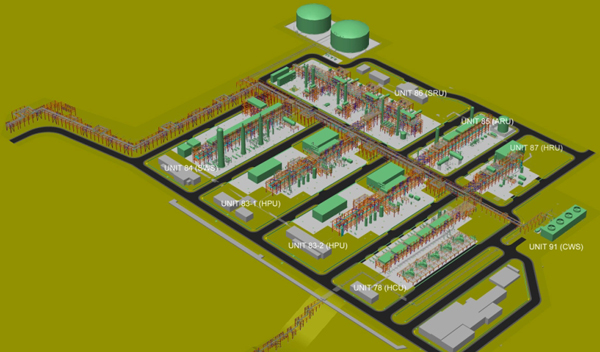 Hyundai E&C recently won the bid for the Puerto la Cruz refinery expansion construction. Above is an aerial view of the refinery.

The project includes upgrading the Puerto la Cruz refinery, about 250 kilometers east of Caracas, to produce high value oil. The construction period is 42 months. This is the first time for the company to enter the Venezuelan construction market. The contract award is meaningful in that the company is expanding to the Latin American markets.

Hyundai E&C won the bid for the refinery expansion and improvement construction in Venezuela based on its construction ability and technology it has accumulated. With this contract the company can accelerate in advancing in the Latin American markets and secure position in similar future projects in the region. The company is now better prepared for oil refinery construction projects in Iraq and Kuwait.

The construction is also the result of active support from governing bodies. The Korean and Venezuelan governments discussed the Puerto la Cruz project in 2011 and 2012 in Korea-Venezuela Joint Committee on Energy and Mineral Resources. There was also support from the Ministry of Knowledge Economy and Ministry of Land, Transport and Maritime Affairs. With similar support, Korean companies can expect to go out in the world market more actively.

The reason for the success in the South American Market and expansion is due to effort in market diversification and improving competitiveness. The company is expanding its market from the Middle East to South America, Africa and CIS.

Hyundai E&C has opened a Colombia branch in 2010 and China branch in 2011. This year it opened South Africa and Venezuela branches.

It also clinched a $250 million deal to build a power plant in Cote d’Ivoire, building a bridge to enter the African market. In February it has secured the South American market again by winning a $ 350 million Bello wastewater treatment plant project in Colombia.

With Venezuela, the refinery construction records an $87.5 billion of accumulated order from overseas as of June. This is 17 percent of Korea’s total $503.4 billion until now. It said, “We are expanding our business to South America and Africa from just the Middle East. The effort to find new emerging markets is bearing fruit.”