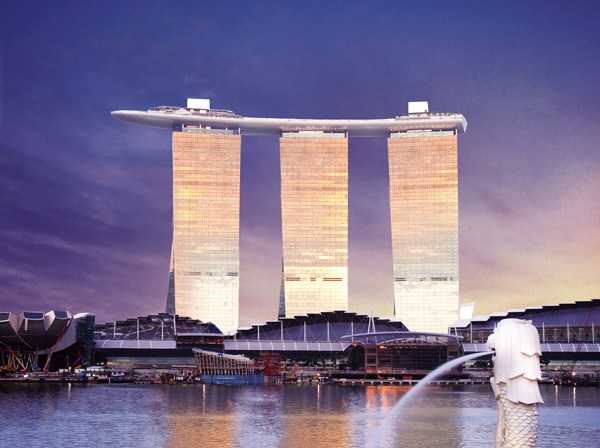 Singapore’s Marina Bay Sands Hotel constructed by Ssangyong E&C in 2010. The hotel with three buildings looks like two cards slanting on their backs.


Ssangyong E&C is one of the most famous builders in Korea. Since the company was founded in 1977, it has expanded to overseas market in Southeast and Central Asia - Singapore, Indonesia, Malaysia, Vietnam, India and Pakistan - and the Middle East - Saudi Arabia, United Arab Emirates.

Even the United States and Japan, advanced construction countries, have recognized the fame, and the company carried out 130 constructions in 20 countries since it advanced to the overseas market, garnering more than $8.5 billion in overseas projects. Especially since it placed No. 2 in the world-famous U.S. construction magazine ENR in the hotel category in 1998, it has maintained itself on the top tier.

So far, the company has constructed luxury hotels, a total of 13,000 rooms, and hospitals, amassing a total of 8,000 wards. In 2010 it constructed the Singapore’s Marina Bay Sands Hotel, the so-called “miracle of 21st century construction,” surprising the world once more.

The hotel with three buildings and 2,511 rooms looks like two cards slanting on their back, a construction that is slanted in a degree that was never seen before. The east wing, which slants up to 52 degrees from the ground floor and from the 229-foot height (23rd floor), is connected to the west wing and then goes up to the 57th floor.

To construct this slanted structure the company used a special method that is used for bridge constructions.

On the top floor where all the three buildings of the hotels connect, there is a Sky Park, twice the size of a soccer field, with a swimming pool, observatory, garden, pedestrian walk and restaurants.

Nearly the length of a 747, about 70 meters (229 feet), is a cantilever, where a portion is stretching out with no support on the bottom.

The construction cost about 1 trillion won ($864 billion) and with high-tech construction methods it was constructed in just 27 months without any accidents for 12,000,000 hours, garnering worldwide acclaim.

The global work of Ssangyong is still growing. This January it received an additional order for a 100 billion won Pakistan Karachi Port reconstruction project.

Ssangyong will focus on resource abundant countries and developing countries where orders for social infrastructure construction are expected to increase, and work to receive orders in overseas luxury construction and complex high-tech projects which it specializes.

The company is improving its planning and marketing ability in new markets such as Russia, Saudi Arabia, Qatar, Kuwait, Iraq and Oman and further.

Especially since financial funding methods are becoming more various with global competition strengthening, the company plans to strengthen its financial sourcing ability using various financial methods in Korea and other countries, keeping up with the trend.