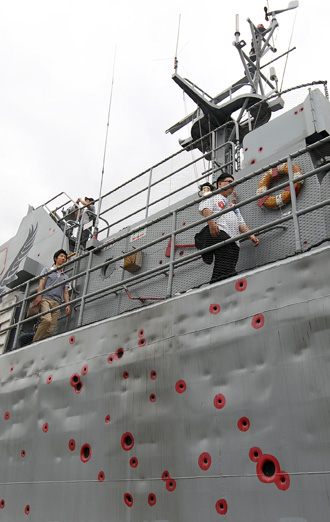 Visitors yesterday look at a replica of the Chamsuri patrol boat from the second Yeonpyeong Naval skirmish in 2002. The replica is on display at the War Memorial of Korea in Yongsan District, central Seoul. [YONHAP]

President Lee Myung-bak will attend a ceremony today marking the 10th anniversary of an inter-Korean naval clash that occurred near the western maritime border in 2002, the Blue House said yesterday.

It is the first time that a sitting president is attending the ceremony.

Lee will also meet with the sacrificed sailors’ families.

“[The ceremony] will serve as momentum to pay respect to the souls of fallen heroes who died protecting their homeland and also assure the entire nation’s determination toward security and national defense,” the Blue House said in a statement.

The second Yeonpyeong Naval Skirmish, which is one of a series of battles between the two Koreas, happened near Yeonpyeong Island, which is the closest South Korean island to North Korea, in the Yellow Sea on June 29, 2002. The skirmish was triggered by two North Korean patrol ships that crossed over the Northern Limit Line (NLL) into the South. The NLL was set up by the United Nations Command after the Korean War ended in 1953.

While South Korea tried to deter them, the ships suddenly opened fire. The clash left six South Korean sailors dead, including Lt. Cmdr. Yoon Young-ha, and 18 others wounded. South Korea’s vessel sank while being towed to the shore. The North is believed to have suffered 30 deaths or injuries.

Today’s ceremony is expected to draw about 3,500 people, including bereaved family members.

Though 10 years have passed, the families of the South Korean soldiers still carry scars. Yesterday, family of the sailors who died gathered at the Navy Hotel near the 2nd Navy Fleet in Pyeongtaek, Gyeonggi, to attend the following day’s ceremony. They also shared memories of their loved ones.

Lim also said she’s “glad to see the president attending the ceremony tomorrow” and that though her husband has been suffering from liver cirrhosis due to heavy drinking to overcome the sadness of losing their son, “I’m glad the country is remembering the sailors that have sacrificed their lives while fighting against the North.”

The first time the government organized a ceremony to commemorate the soldiers was in 2008 when the Lee Myung-bak administration began. The previous liberal governments led by Kim Dae-jung and Roh Moo-hyun did not officially commemorate the fallen heroes, which elicited complaints from the families.

Instead, the Navy organized ceremonies to commemorate the dead. In previous ceremonies organized by the Lee government, prime ministers, including Han Seung-soo, had attended.

Kim Han-na, 38, who lost her husband Staff Cpl. Han Sang-guk, left her home country and went to the United States alone in 2005. She returned after three years.

While living in the U.S., Kim said her heart was moved when she attended the opening of the Massachusetts Korean War Memorial. Her seat was next to that of U.S. Senator John Kerry.

“I really wish Korean society better appreciated those who are serving the country and that people felt more thankful for their sacrifices,” Kim said.