Cabbies in black took foreign tourists for a ride

Cabbies in black took foreign tourists for a ride 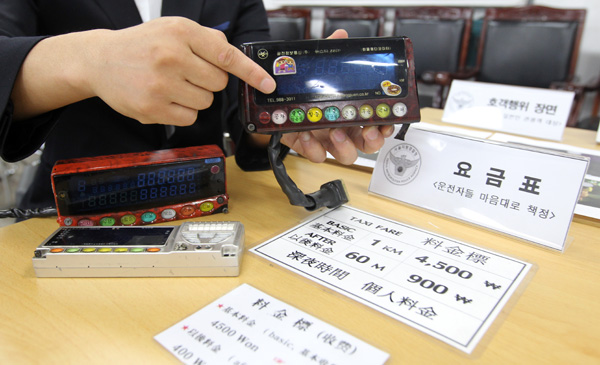 
A group of Seoul taxi drivers has been caught preying on foreign tourists and ripping them off outrageously.

But in at least some of the cases, the modus operandi was clever enough that the tourist wouldn’t even know he or she was ripped off - until the credit card statement came in the mail the next month.

The Seoul Metropolitan Police Agency’s international crime investigation team yesterday said it is investigating 21 drivers who decorated private vans just like the “Mobeom taxi van,” an officially approved, black-colored van with a higher standard of service and higher fares than ordinary cabs. Some tourists choose the black, deluxe cabs on purpose to avoid being ripped off and to be sure to get a proper receipt at the end of the ride.

Police said these cabs targeted foreigners in neighborhoods in downtown Seoul such as Myeong-dong, Insa-dong, Namdaemun, or shopping areas near Dongdaemun, because they figured tourists would be less likely to go to police if they suspected something was wrong.

Actually, taxi vans are for the use of passengers with more than 20 kilograms (44 pounds) of luggage, but these drivers took anyone. They had bogus meters, roof boxes and the red light boards that show when taxis are vacant. Much of the equipment was put on the car with Velcro so it could be removed in a hurry.

Meters could be manipulated at the driver’s desire.

A 52-year-old cabbie surnamed Kim told police that he picked up a Chinese traveler in Myeong-dong and charged him 171,000 won ($148) to get to Yangpyeong-dong, western Seoul, 10 times the normal fare.

A 55-year-old cabbie, surnamed Kim, confessed that he approached a Thai traveler at Incheon International Airport on June 2 and dropped him off in Cheonan, South Chungcheong, about 112 kilometers (69.5 miles) away. The meter quadrupled the fare to about 550,000 won. The traveler resisted, so Kim cut the price to 440,000 won.

Baek confessed to police that he applied this trick to eight other foreigners, padding their fares to up to eight times the normal amount.