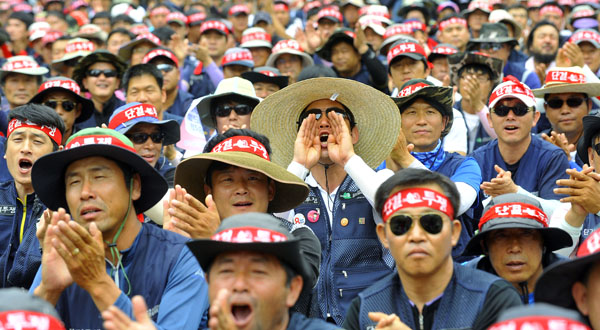 Construction workers stage a large-scale rally yesterday at Seoul Plaza, central Seoul, demanding payment for overdue wages and better working conditions. They will soon return to work as the labor union yesterday reached an agreement with the government. [NEWSIS]


Following the nationwide trucker strike, construction workers pulled a similar move, threatening to paralyze ongoing projects such as the stadium for the 2014 Asian Games in Incheon.

But the strike, which began Wednesday, ended yesterday as the labor union reached an agreement with the government over the dispute over paying overdue wages and payment for rental construction equipment.

The Korean Construction Workers’ Union, which has about 20,000 members across the country, held a large-scale rally at Seoul Plaza, central Seoul, as part of the strike that started on Wednesday.

“I received shipping charges that had been overdue for the past six months,” a 52-year-old trucker surnamed Ha, who worked on the state-run four-river restoration project, told the JoongAng Ilbo.

“I took part in this rally to get rid of the custom of overdue payments in the construction sector.”

One of their complaints was that construction companies didn’t pay fees for the rental equipment to union members who were running the rental business because many of them went bankrupt due to the economic downturn.

The Korean Metal Workers’ Union, a nationwide union for employees in the shipping and automobile industry, also held a rally in central Seoul near Bosin Pavilion to announce their plan to stage a general strike in early July, where about 1,000 members attended.

“I was fired from the Daewoo Motor Sales Corporation, which was bought out by another company,” a 50-year-old man surnamed Kim told the JoongAng Ilbo. “We want the government to solve the matter of reemployment.”

The two unions separately staged street parades and then joined another rally of the Korean Confederation of Trade Unions, an association of labor unions.

There, roughly 20,000 workers participated in a massive demonstration demanding three things: to stop hiring people as temporary workers, to abolish layoffs for business efficiency and to guarantee minimum wage.