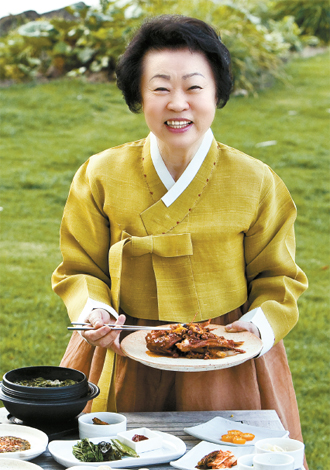 During the Joseon Dyansty (1392-1910), Jeju Island was a place of exile. Scholars and intellectuals banished from the mainland came to live on the volcanic island alongside Jeju natives.

Food was hard to come by. Every meal was a gift for the islanders, each dish made with the acknowledgement that every ingredient must be appreciated and cherished.

At the end of last month, an exhibition featuring a re-enactment of the “exile meals” during the Joseon Dynasty was held at the Jeju Grand Hotel. The chef in charge of the exhibition, Kim Ji-soon, said she participated in the event to spread her knowledge of unique Jeju cuisine - the meals she grew up eating.

During the exhibition, the 76-year-old showcased traditional Jeju dishes including melguk (anchovy noodles) and nengguk (cold noodle soup) that are popular during the spring and summer on the island.

Kim, a Jeju native, grew up with traditional Jeju food cooked by her mother and grandmother. During the 1970s, she went under the tutelage of renowned Korean food expert Wang Jun-ryeon and started building a career herself, specializing in Jeju cuisine.

In 1985, Kim opened a cooking school on Jeju Island and became a designated Jeju “traditional food master” by the government in 2012. Besides the cooking school, Kim is also a researcher at the Korea Food Culture Research Center and the Jeju Traditional Food Preservation Center.

The Jeju food master has also been busy over the past year writing a book about traditional Jeju food in association with the Jeju regional government. She said that through the book, she wants to provide information about authentic Jeju recipes and see that the culinary culture of Jeju stays intact.

Kim talked to the JoongAng Ilbo about the charms of Jeju’s traditional dishes and the bleak history that makes them so unique today. 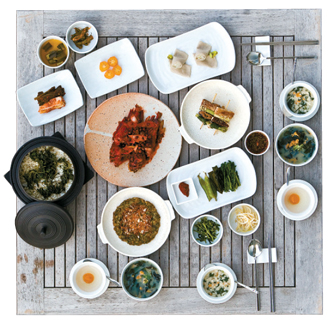 A traditional Jeju meal consisting of 15 different dishes prepared by Kim Ji-soon at her restaurant, Hanoru in the Haevichi Hotel on Jeju Island By Shin Dong-yeun

Q. How do you characterize the traditional food of Jeju?

A. We use seasonal ingredients and try to capture all the flavors in them as much as possible. Traditionally in Jeju, people used mostly soy sauce and doenjang [fermented soy bean paste] for seasoning and not much gochujang [spicy red pepper sauce] or gochugaru [spicy red pepper powder] was used. Instead, Jeju people would cut up fresh peppers for a spicy flavor. The way doenjang was used in Jeju is also different as we didn’t boil it down in a soup but ate it raw as a garnish.

Why did Jeju Island go through so many years as an impoverished area?

The farming in Jeju didn’t go well, and until the early 1960s, it was difficult to find rice or water here. I heard that the scholar Kim Jeung-hee [1786-1856] was banished to Jeju Island when he was 66 and upon getting a meal that was only comprised of boiled millet and doenjang, he said, “This can’t be meant to be consumed by human beings.”

The island was that impoverished. For example, if you cook gingijuk [crab porridge] the way that the islanders cooked it in the past, there will be a lot of lumps because they wanted so much to retain the original shape of the rice because rice was so scarce.

So how has Jeju’s food culture evolved over the years?

In Jeju Island, there wasn’t a strong jonggajip [a family structure in Korea that has traditionally been perceived to have the best cooks and the best meals in the family clan] tradition. Everyone was just poor and the hierarchy wasn’t that strict. So during jesa [a memorial ceremony for ancestors] there wasn’t a distinction of what you can or can’t eat. Everyone, from grandparents to children, ate the same thing. That’s why Jeju’s traditional food is all very rustic.

What are your future goals concerning the cultivation and promotion of traditional Jeju cuisine?

There are so many people who don’t know about the unique food culture in Jeju. We have a long way to go. There are, however, menus that I think are quite promising in terms of internationalization. Recently, Michelin three-star chef Jean Georges [Jean Georges Vongerichten] came to Jeju and finished two bowls of momguk [a pork noodle dish originating from Jeju Island].

Momguk is made using pig intestines and has a unique taste. It is served with pork broth and boiled pork slices.

Jean Georges said that the dish reminded him of what his mother cooked for him in France when he was little. Korean food is globalizing, and I don’t see why Jeju Island can’t be a part of this movement. I think if the dishes are modernized a bit, they have potential globally.