Iran offers ships for oil, with a warning

Iran offers ships for oil, with a warning 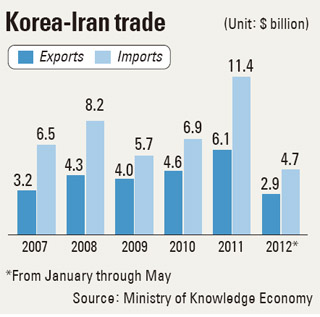 Tehran has offered to deliver oil to Korea using its own ships if the government ignores pressure to join sanctions on the country and continues to import Iranian oil, the Ministry of Foreign Affairs and Trade said yesterday.

Korea has been exempted from the U.S.-led sanctions but has said it cannot keep importing the fuel from the Middle Eastern country due to problems with the reinsurance of ships. Most reinsurance policies are issued by European companies, and the EU has put a ban on insuring shipments of Iranian crude.

Adding a pointed stick to the proffered carrot, Iran said that if Korea stops importing its oil, it will respond by cutting all of its imports from the country. It refrained from giving a deadline.

“Korea is now in a situation where it has no choice but to stop importing Iranian oil as the issue is interlinked with the European Union,” said an official at the Foreign Ministry yesterday.

Korea relied on Iran for around 5 percent of its total crude imports in May, a drop from 9.4 percent for the whole of 2011. Last month, the two companies - the only importers of Iranian oil in the country - purchased a combined 550,714 metric tons of crude from Iran.

The official said Korea now has two options: The government can insure its own ships, as Japan does, or it can use Iran’s. Financially, it is a no-brainer. The former would cost in the region of $7.6 billion, while the second option is considerably cheaper at just $1 billion. The problem is more one of trust.

He said Japan can cover the costs because its economy is six times bigger than Korea’s, adding that the government is currently reviewing its options.

“Iran has requested that we find ways to continue imports,” said an official at the Ministry of Knowledge Economy. “We see the ambassador’s comments as an attempt to expedite the process.”