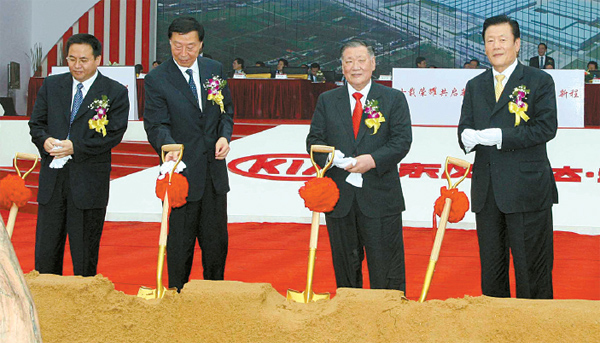 
Kia Motors held a groundbreaking ceremony yesterday for its plant in China’s Jiangsu Province, the automaker’s third in China. 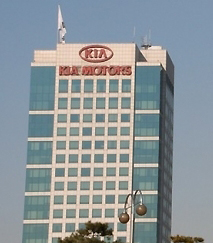 The production base in Yancheng city represents another platform for Korea’s second-largest automaker to boost sales in the world’s biggest auto market.

Kia said its joint venture in China, Dongfeng Yueda Kia Motors, has officially started construction on the plant, which will be able to produce 300,000 vehicles a year. It is scheduled to be completed in the first half of 2014, giving Kia the capacity to produce a total of 740,000 vehicles annually in the country.

“Today is a significant day as Dongfeng Yueda Kia Motors builds on its foundation to make a great leap forward in China,” Hyundai Motor Group Chairman Chung Mong-koo said at the ceremony, which 1,000 people attended. 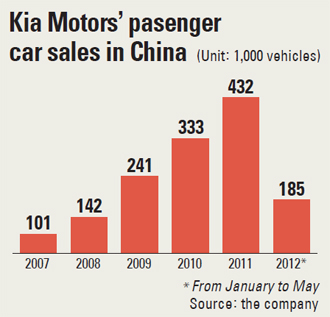 He said the plant will help improve product quality and increase Kia’s brand credibility in China.

The third plant is located along with the other two owned by Kia at the city’s economic development zone. It is just five kilometers (3.1 miles) from the second plant, creating potential for a strong synergy effect by cross-utilizing existing facilities, the carmaker said.

The third plant will also include a research center and a 1.96-kilometer-long test-drive facility. Small and midsized vehicles are set to be produced there, Kia said.

Yancheng welcomed the new plant, saying it will help the development of its regional economy. The municipal city government provided the site for free and gave other advantages to the company, such as a reduced income tax, according to Kia.

“When Dongfeng Yueda Kia Motors first started operating here, not many people thought it would succeed, but now the company has become the representative automobile company in Jiangsu,” said Luo Zhijun, party secretary of Jiangsu Province. “We will keep supporting the company to successfully run the third plant.”

According to China’s State Information Center (SIC), the nation will have 13 million registered vehicles this year, up nine percent from last year’s 11.9 million. The size will increase to 16.6 million in 2014 and 18.2 million in 2015, it said.

Shanghai Volkswagen plans to increase its annual production from 1.5 million vehicles to 1.97 million by 2015, while Shanghai General Motors is reported to be expanding its production capacity from one million to 1.6 million by the same deadline.

Kia has been growing annually since it entered China in 2002. With models like the K2, Forte and Sportage R proving big hits, it sold 185,543 vehicles from January to May, up 16.7 percent from the same period last year.

The company owned 1.9 percent of the Chinese passenger car market in 2007 to rank 18th, but climbed to eighth last year by clinching a 3.6 percent stake.

Kia said that without the third plant, it expected to see its share plunge to 2.6 percent in 2014.