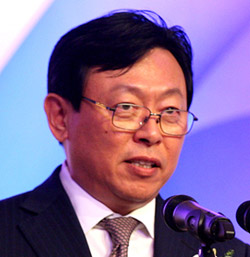 Lotte Group Chairman Shin Dong-bin said all of its affiliates have implemented austerity measures to brace for a possible worst-case scenario in the second half of the year, as pressure mounts with declining sales growth and profits.

Executives have been told to scale back production costs and ordered to strictly follow manuals providing guidance for investing in new businesses, among other steps.

“We implemented the move as our strategy of just seeking profit seemed too risky given the extreme instability of the economy, a situation that is not expected to go away anytime soon,” Shin said at an executive meeting attended by 60 representatives from 48 domestic and foreign affiliates.

“Screening the way we analyze investments on a project-by-project basis is one of the key issues in the decision-making process,” Shin said.

“There must be a clear exit plan should the investment strategy prove to be unsound.”

At the meeting, executives discussed the economic forecast in the second half and the progress of major businesses.

According to Lotte, Honam Petrochemical posted sales of 3.8 trillion won ($3.3 billion) in the first quarter, down 2.2 percent on-year.

Its operating profit slid 62 percent. Hit by an operating restriction that compels big retailers to close their stores for two days a month, Lotte Mart posted a 1.5 percent drop in Q1 sales.

The situation was only slightly better for Lotte Department Store, which registered measly sales growth of 2.1 percent in the first five months, down from an 11.9 percent expansion in the corresponding period last year.

Shin also urged the group’s food-exporting companies to try and develop popular products, while calling on retailers to expand their range and integrate purchases.

He asked petrochemical companies to improve efficiency at their plants.

Other conglomerates are also battening down the hatches as the European financial crisis is expected to keep dragging down the global economy.

Hanhwa Group has already implemented emergency management at its major affiliates. Hanhwa has been managing internal and external risks by reducing its marketing and administrative expenses by 20 percent.

SK Group also forecasts a further decline in its business performance in the second half.

“With a severe downturn in consumption, the communications and oil refinery markets are getting worse,” said an employee at the group.

Other factors at home and abroad have also tightened the screw for domestic companies, such as the suspension of Iranian oil imports, which caused oil prices to spike.

The automotive industry is also concerned about decreasing sales as the slump in the domestic economy is likely to continue through the second half and growth is also slowing in China and India.

Hyundai Chairman Chung Mong-koo recently ordered preemptive steps against the euro zone crisis having effects on its car sales there.

Financial observers said most Korean companies are now implementing austerity measures even though they have not made them public.

Hyundai Motor and its affiliate Kia Motors expect a sales boost of 13 to 14 percent in the second half of the year based on resilient exports, but GM Korea and Renault Samsung Motors are likely to record negative growth, according to industry officials.