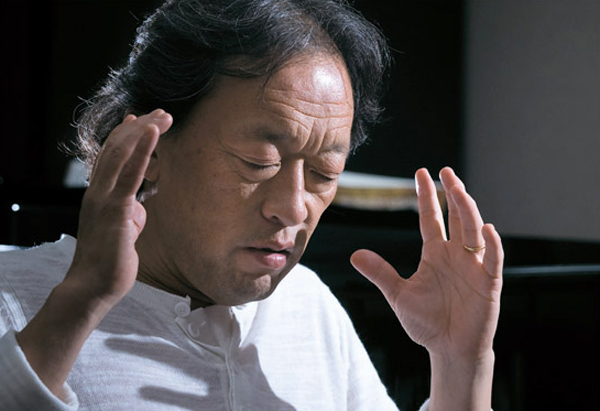 
World-renowned principal conductor and artistic director of the Seoul Philharmonic Orchestra Chung Myung-whun, 59, made international headlines a few months ago when he set out to make a breakthrough visit to North Korea to form an orchestra of North and South Korean musicians.

The concert will be held at 8 p.m. Aug. 4 in the amphitheater at Yonsei University, central Seoul.

“Leaving political issues aside, North Korea is our family and our fellow brother,” Chung said. “It would be good to help those children who are in grave poverty and to further raise the public’s awareness of them through this concert.”

Chung proposed the establishment of the Asia Philharmonic Orchestra in 1997 to promote harmony and friendship within the Asian music community, and he has been leading the orchestra ever since. This year, the APO will perform twice in Korea and twice in Japan.

When the JoongAng Ilbo met with Chung recently at the Seoul Philharmonic Orchestra’s home in Gwanghwamun, central Seoul, Chung explained, “It would be great if the North Korean Orchestra participated in the APO concert, but it is also helpful to at least help North Korea some other way through this concert.”

In March, the French Orchestra of the Radio France Philharmonic, led by Chung, and North Korea’s Unhasu Orchestra worked together to produce a performance at the Salle Pleyel in Paris. The program included music from several symphonies, including Korea’s traditional song “Arirang,” apparently dedicated to Chung’s North Korean mother.

“After the concert, I asked the Unhasu Orchestra to join the APO, but due to the political conflicts that were happening between the two Koreas at that time, it could not be done,” Chung said. “Someday, I want to achieve my dream of performing in Seoul and Pyongyang, as a South and North Korean musician.”

For the upcoming concert, the APO will perform an “ensemble chorus” of Beethoven’s Symphony No. 9. “The musical piece is without a doubt magnificent, but we want to send out a message that the world can become united,” he said. “Plus, I think it matches well with this year’s APO slogan of ‘An Orchestra of Harmony and Unity.’?”

Since 2008, Chung has been a Unicef goodwill ambassador and partnered with the agency to produce the North Korean children aid concert in 2009.

Of the upcoming concert, South Korea Unicef Secretary General Ryu Jong-soo said, “All the proceeds will be given to the International Committee of Unicef and will then be used to provide aid, such as water and vaccines, and to treat children with malnutrition in North Korea.”

“In terms of concert expenses, we are having some problems. We do not have many skills in getting patronages from businesses or enterprises, so it’s difficult,” Chung said.

Instead, he chose to raise funds by appearing in commercials, and Chung recently filmed one for Kyobo Life Insurance.

Another reason Chung appeared in the advertisement is his relation with the company’s president, Shin Chang-jae.

“Three years ago, I took the children from a charity house in Busan to perform at Carnegie Hall in New York. At that time, the budget was too tight and we needed an additional amount of about 100 million won [$86,600],” said Chung. “When president Shin met me for the first time and heard our news, he made the decision to become our patron on the spot.”

The conductor and the insurance executive have been close friends ever since.

And as Chung believes that Shin is someone in whom he can have complete confidence, Shin and Chung’s other admirers should have no doubt the conductor will continue to work to raise awareness through his music.
By Song Ji-hye [estyle@joongang.co.kr]