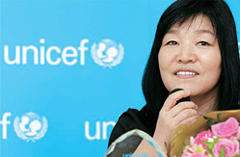 Novelist Shin Kyung-sook, shares her vision after being named goodwill ambassador for the Korean Commission of Unicef at Unicef Korea’s headquarters in Jongno District, central Seoul, on Wednesday. [YONHAP]

Novelist Shin Kyung-sook, best known for the international best seller “Please Look After Mom,” has been named a goodwill ambassador for the Korean Commission of the United Nations Children’s Fund on Wednesday, according to Unicef Korea.

The 49-year-old is the second Korean novelist to hold the position since the late Park Wan-seo, who had served for 18 years since 1993. Park died last year.

As a goodwill ambassador, Shin will write stories for children, visit children’s facilities and participate in Unicef charity events and advertising.

“I am happy to be able to take part in such meaningful endeavors and help children,” Shin said. “I was inspired by how Park served as a goodwill ambassador .?.?. I feel a great responsibility to follow his example and do my best to perform the duties of the position with the same kind warmth and dedication.”

Shin is not a stranger to helping the underprivileged. She has made regular donations from the royalties on her book. And in February, when she won an award dubbed mark of respect from spirits manufacturer Pernod Ricard Korea, she donated the prize money to Unicef Korea and the Purme Foundation, which is dedicated to building rehabilitation hospitals for people with disabilities.

Shin is one of Korea’s best-known and critically acclaimed novelists. About two million copies of the Korean version of “Please Look After Mom” have been sold since it was published in 2008, helping to instigate Hallyu, or the Korean Wave, in the literary world.

“Please Look After Mom” was translated into English and released in the United States last year. A Slovenian edition of the novel is scheduled be published soon.