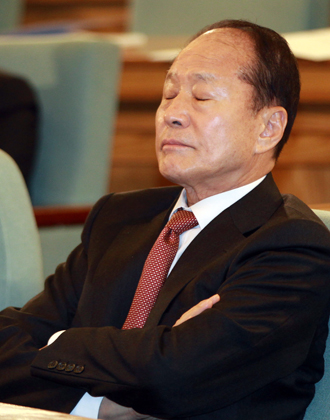 President Lee Myung-bak’s elder brother Sang-deuk has been summoned by prosecutors over suspicions of receiving bribes in return for his influence in salvaging troubled savings banks.

According to the Supreme Prosecutors’ Office’s team on the savings bank scandal, Lee, a former lawmaker of the Saenuri Party, is suspected of receiving a large sum of money from Kim Chan-kyong, chairman of Mirae Savings Bank.

“When Lee, the elder brother of the president, was a lawmaker, I gave money to him to fund his political activities,” Kim was quoted by the prosecution as saying.

Based on the testimony, the prosecution told Lee on Thursday to submit to questioning next week. Lee was asked to show up at 10 a.m. Tuesday at the Supreme Prosecutors’ Office. 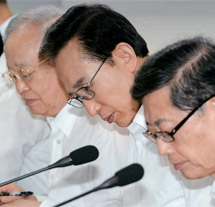 “For now, Lee is not a suspect, but there is a high possibility that he will soon be,” a source at the prosecution said.

The prosecutors also have suspicions that Lee received money from Lim Suk, chairman of the Solomon Savings Bank.

Before a group of ailing savings banks was shut down in September 2011, Kim of Mirae Savings Bank gave Lim 2 billion won ($1.75 million), including 1.4 billion won in cash and six gold bars, asking for his help to save his bank.

The Financial Services Commission still suspended both Mirae and Solomon banks in addition to two others in May due to their poor financial health.

The prosecution is also looking into the allegation that Lee received money from Prime Savings Bank.

The 77-year-old former lawmaker was also accused of receiving some 3 million won a month for the past 10 years from Kolon Industries through his aide.

The investigation into the savings bank scandal also touched other political bigwigs.

The investigation team said yesterday that Representative Park Jie-won, the floor leader of the Democratic United Party, and Representative Chung Doo-un of the Saenuri Party were also suspected of receiving money.

Both representatives deny they were bribed.